Twenty-eight more Merseyside pensioners look set to be thrown out of their care home, when Kelton Grange in Aigburth closes its doors for the final time. They face a grim future, as half of all pensioners die within a short time of being moved. 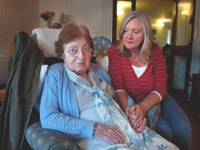 INSTEAD of being left to live out the rest of their lives in peace, 28 frail Merseyside pensioners are now being forced to look for a new home.

Relatives of the residents of Kelton Grange nursing home, in Aigburth, last night launched a battle with the Catholic Church's charity, Nugent Care, to keep it open.

But leaders of the independent care sector said a financial crisis could mean the closure of all of Liverpool's 76 homes within 10 years, leaving hundreds of pensioners homeless.

It was revealed that at least three other homes in the city are weeks away from announcing their closure. Since 2000, forty-six care homes have closed their doors in Liverpool, with many of the buildings being sold for property development.

Though Nugent Care says it has no plans for the building on Woodlands Road, those affected by the closure say they fear their loved ones are being moved to make way for luxury apartments.

Another residential home for the elderly on the site, Geel, remains open, as well as an unoccupied convent.

Brenda Taylor, of Mossley Hill, whose mother Maisie, 85, is a Kelton Grange resident, said last night: "We are very suspicious about the reasons for the closure. We had not been warned that financial problems were so bad.

"It seems that, when things are getting a little rough, Nugent Care has just thrown the towel in because a better financial option is available.

"It is supposed to be a charity. Of course the home is not going to make money. If we had been told, we could have tried to raise some.

"Their motto is 'Because Nugent cares'. We are not seeing any evidence of that here."

The rest of the article can be read at: