In an disgraceful betrayal of his fellow firefighters and the people of Merseyside in general, Area Commander Dan Stephens has used the Liverpool Echo to claim that "more than 100" scabs will cross FBU picket lines next week. 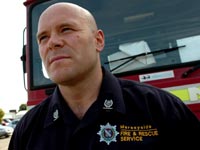 The face of a traitor

As previously reported, Merseyside firefighters have overwhelmingly voted to strike against the cuts proposed by the Fire and Rescue Authority and demanded by the government.

However, Dan Stephens is pushing himself forward as an ultra-loyal friend of the bosses, which makes him an enemy of his colleagues and the people of Merseyside.

In today's Liverpool Echo, Stephens insisted that "More than 100 FBU members are going to disregard the strike. That number will increase when they realise that they are not achieving anything from their action."

Merseyside Fire Brigades Union secretary Lee Skarratts commented that: "Merseyside fire crews do not want to take strike action at all. But be in no doubt we are prepared to take short periods of strike action to secure the fire service and safety for the long-term."

"A small number of members have drifted away, but we think that is for other reasons. We are concerned by the approaches made by senior managers for this issue. We have had confidential reports that there has been unwelcome attention to the membership of the union."

So the bosses are up to dirty tricks, and Stephens clearly believes his career is more important than the long-term safety of Liverpudlians. We must all support the overwhelming majority of firefighters, as it is their job to support us.

The mainstream media was bound to go for the throats of Merseyside FBU. But it is important to remember three things. First, they are trying to make sure there will be at least as many fire engines and firefighters in the future. Second, there is no cover because the Territorial Army is standing by to go into Afghanistan. Third, part of the reason the government makes these cuts is that they are spending so much on war!