Despite a massive and hypocritical media campaign against the firefighters, Merseyside FBU members today began what is effectively an eight day strike in protest against £3.5 million of cuts. 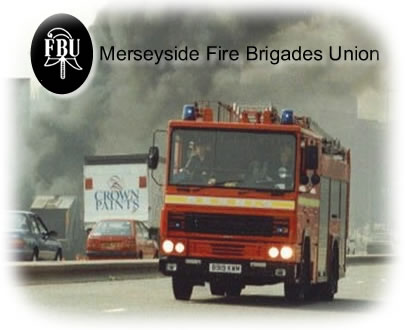 As previously reported, Merseyside firefighters have overwhelmingly voted to strike against the cuts proposed by the Fire and Rescue Authority and demanded by the government.

The firefighters will strike from 10am today until 10am on Monday, then will begin another four day stoppage two hours later. Unlike in previous strikes, the region will be without military cover, since the Territorial Army are on standby to go into Afghanistan and Iraq to help out in Blair's oil wars. Instead, some cover will be provided by management and office staff.

Even as the strike began, government apologists were lining up to take cheap shots at the strikers, using the Liverpool Echo as their mouthpiece. Professor John Ashton - the North West's outgoing public health director - condemned the strike as "a reckless risk to public safety."

But it is the cuts that are a reckless risk to public safety, and that is precisely why we must all support the firefighters!

Merseyside Fire Brigades Union secretary Lee Skarratts commented that: "These are some of the worst cuts ever proposed in any local fire service and will inevitably damage our operational capability. The planned cuts are ill-thought-out panic measures, which are the result of a failure of financial management."

Last night - in a move clearly designed to undermine solidarity - it was announced that assistant chief fire officer Bill Evans wrote to FBU secretary Les Skarratts calling for fresh talks this coming weekend, two days after the strike was scheduled to begin.

But Skarratts said he replied to Evans yesterday, and asked for a meeting in a last-minute effort to avert industrial action, but Mr Evans was apparently "too busy" to see him.

"We were surprised that the dates given for the talks were after the strike had already started," said Mr Skarratts.

"I was prepared to drop everything for a meeting today, but he was not available. We always enter into talks with the service positively, and would never be too busy. We go with an open mind and there is every chance these talks could have resulted in a positive resolution."

The mainstream media was bound to go for the throats of Merseyside FBU. But it is important to remember three things. First, they are trying to make sure there will be at least as many fire engines and firefighters in the future. Second, there is no cover because the Territorial Army is standing by to go into Afghanistan and Iraq. Third, part of the reason the government makes these cuts is that they are spending so much on war!