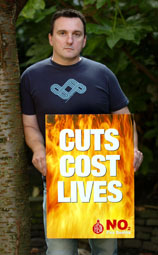 A few weeks ago, Merseyside firefighters overwhelmingly voted to strike against the cuts proposed by the Fire and Rescue Authority and demanded by the government.

Today marked the halfway point in the strike, as firefighters returned to work for two hours from 10am. They now plan to strike for another four days. Unlike in previous disputes, there is no military cover, since the Territorial Army are involved in Afghanistan, Iraq and Kazakhstan - where they are to practice 'peace support operations'.

Following his second meeting with Bill Evans, Skarratts was due to address a mass meeting of strikers this afternoon.

This evening, the Liverpool Echo continued to paint the strikers as the bad guys. It published allegations from the office staff who are currently manning fire engines that they have received abusive phonecalls, and a 'spokesman' claimed that a gauge on one of the engines had been tampered with.

It is significant that these pro-cuts workers made these allegations public - prejudicing any legal proceedings - rather than informing the police. With the strike surpassing official expectations and remaining solid, the use of the Echo is a cheap shot at strikers who have concern for public safety at the heart of their actions.

It is important to remember three things. First, the strike was called to make sure there will be at least as many firefighters and fire engines in the future. Second, there is no cover only because the Territorial Army is supporting Blair's oil wars. Third, part of the reason the government makes these cuts is that they are spending so much on war!