With just forty hours to go in this round of strikes, the Fire Authority finally agreed to come back to the table....on Monday! Meanwhile, the Authority has planned an away day at Aintree racecourse, to paid for by the taxpayer! 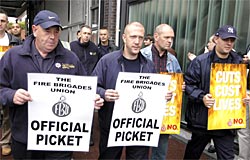 Today marked seven days of the initial eight day strike. Unlike in previous disputes, there is no military cover, since the Territorial Army are involved in Afghanistan, Iraq and Kazakhstan. On Wednesday, a Merseyside FBU press release announced that 'Merseyside fire crews are taking eight more days of strike action. The fire authority has been given the statutory notice of the start of strike action from 10.00 on 12 September until 10.00 on 20 September'.

The Fire Authority seem reasonably content that time is on their side. With every day that passes, one thousand fire fighters lose a day's pay. Their complacency is shown in their refusal to meet FBU representatives until the day before the second eight day strike is due to begin. Indeed, they are spending time and tax payers' money on a meeting at Aintree racecourse tomorrow.

“This Friday they have organised a two-hour ‘Awayday’ at Aintree racecourse at the expense of council taxpayers. They can make time for drinks and nibbles but are again too busy to meet and thrash out a deal to end a fire strike.

“Merseyside fire crews are furious at the approach of the fire authority to these talks. They are behaving as if they are relishing this dispute rather than looking forward to resolving it.”

All trade unionists and anti-capitalists on Merseyside therefore have to step up to the plate and start putting all their theories into practice. We must recognise that it is the profit system that has demanded these cuts, and the profit system which has taken the Territorial Army off to the Middle East to fight for control of oil. With the big Manchester protest at the Labour Party conference coming up in sixteen days, we must use that media spotlight to highlight the link between wars abroad and cuts at home.

National demo called by FBU in support of the Merseyside firefighters: