Saturday morning protest at Hafod Quarry, Johnstown, Wrexham, where landfill waste from Merseyside is being dumped on a site which includes an SSSI and a Special Conservation Area, and which is only 150 yards from local houses. But Hey! This is big business. Who cares about a few extra cancers and kids born with cleft palates and other abnormalities? We do! 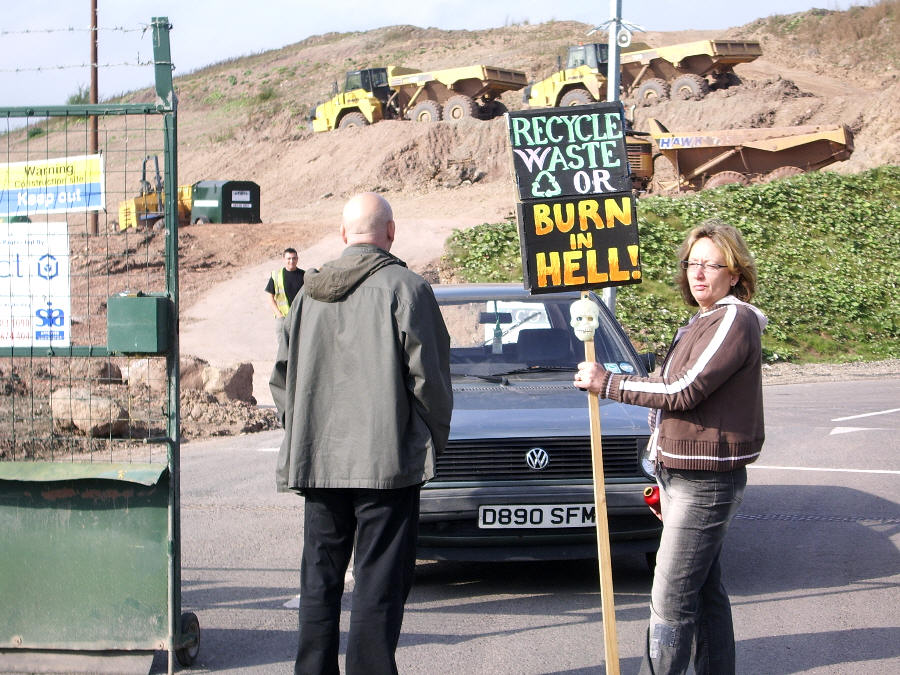 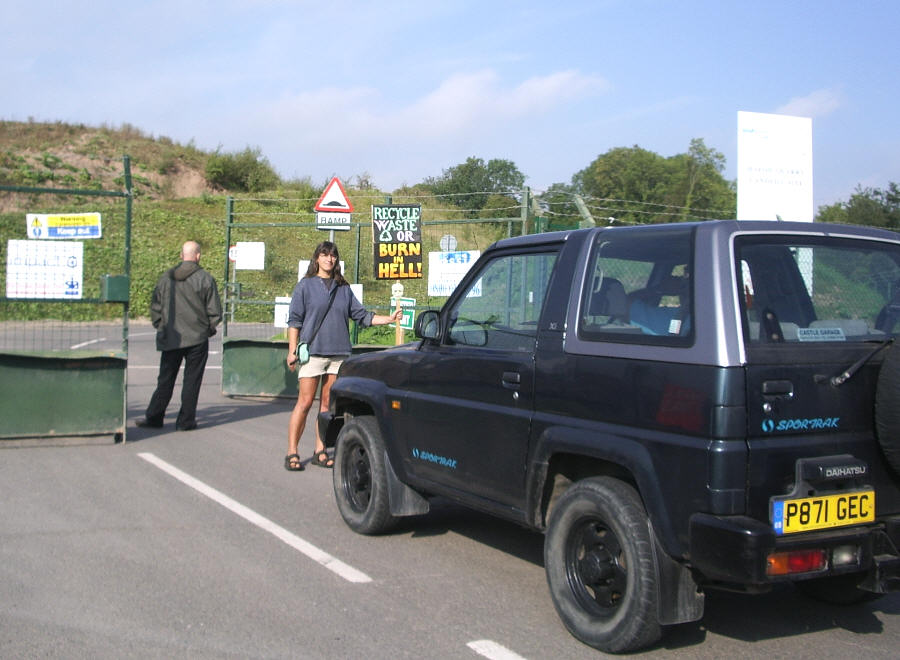 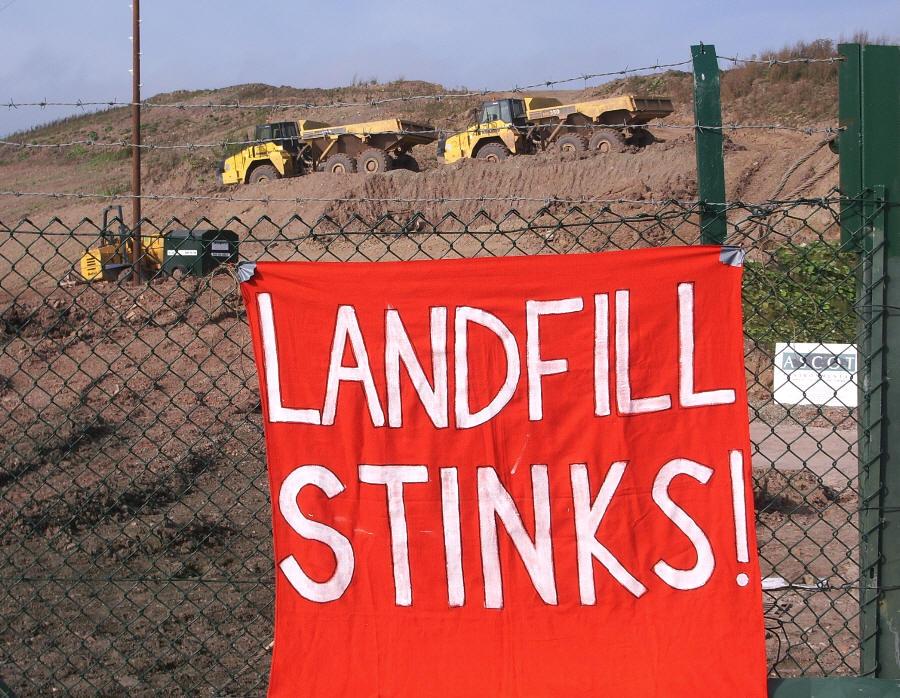 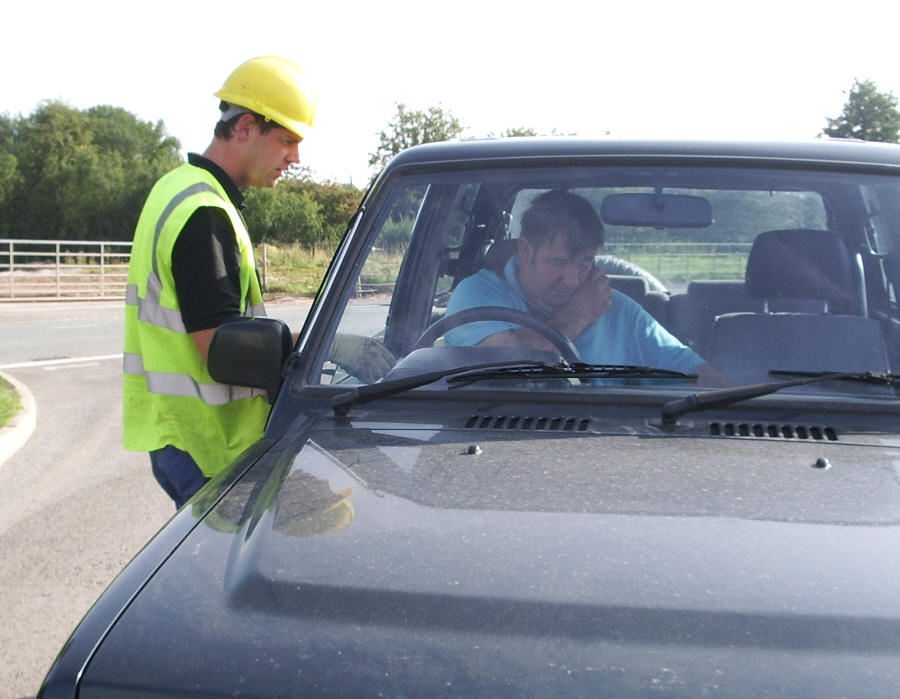 Two protesters mounted a blockade at the gates of Hafod Quarry, Johnstown, Wrexham this morning, 9th September, arriving at around 9.30am and tying a large LANDFILL STINKS! banner to the fence. Apparently, no dumping is taking place today; instead work is being done on the site ready for more tipping next week. More quarry information, including some background to the protests, can be found here:

As we arrived, two vehicles left the site, one pulled up to the stop sign at the road edge before turning, while the white van sailed out on the wrong side of the road with scant regard for road safety. If anything had been coming into the site, there could easily have been a head-on collision.

We tied our banner to the fence and the security guard came over to chat to us and to agree that landfill is unpleasant, although he felt that everyone working there was “just doing it to feed themselves and their families, and you wouldn’t want to see them starve, would you?” We pointed out that, while we understood that jobs are important to people, all the people who work at the landfill site and help Mersey Waste in any way are contributing to the poisoning of the local community. We talked about some of the health risks and he seemed genuinely concerned about his own health and keen to go away and find out more.

Then one of the vehicles arrived back at the site. The two of us stood between the vehicle and the gate, with our “RECYCLE WASTE OR BURN IN HELL” placard. The security guard was quite upset. “He’s only gone out to get his butties. He’s just the electrician.”

“Even just the electrician is helping this site operate.” The electrician got on his phone to the police... Another car drew up at the gates to drive out of the site. The driver got a bit annoyed about not being able to leave, then got out of his car to walk past our blockade and talk to the other driver. He left his keys in the ignition and the engine running, something that makes us mad.

“Please will you turn off your engine.” He replied with an obscenity. “Oh well, I’ll go and do it for him then.” One of us started to walk towards his car, which prompted a somewhat disproportionate response in our view.

“OK, just turn the engine off. You shouldn’t leave it running when you’re not in it. It’s dangerous and illegal.”

“What you’re doing is illegal. This is private property. F*** off.” He raced past us and turned off the engine and removed the keys.

“Thank you. That’s all we were asking. There’s an oil crisis, you know.” We went back to standing in front of the other car. The eff off driver asked the security guard to open the other gate, which he did, leaving us rather a wide area to cover with two people, and we didn’t trust this guy not to mow us down so we let him past. The security guard shut the other side of the gate again and the electrician stayed in his car behind our blockade, obviously looking forward to the police arriving and sorting us out.

After another ten minutes or so, the police had still not arrived and we wanted to have a wander round the perimeter of the site, so we packed up our banner and placard, waved the electrician into the site in a friendly manner, and set off on foot along the road. As we did so the police finally turned up. They spoke with the guys at the gate, then came after us up the road. The policeman seemed to have forgotten his helmet.

“Please stay on the pavement. Can we talk to you for a minute?”

“We weren’t planning to leave the pavement.” The first police officer was trying to be very nice and reasonable. He explained that there had been a complaint made of attempted theft of keys from a car at the quarry and that one of us was the alleged perpetrator. We explained what had happened. The police pointed out that the driver could do what he liked on private property. I said I still felt it was dangerous and damaging to the environment, but in any event I had no intention of stealing this man's keys or his car or anything else – I was only concerned to switch off the engine, and as soon as he'd started to come over to do it himself, I'd stopped. The police officer said that alleged victim of the alleged attempted theft wasn’t actually at the site at that moment – his mates were trying to contact him – and in the meantime the police officer just needed a few details from us.

“Are you going to arrest me?”
“No, I just need your name and details.”
“Well, as you know, I don’t have to give those unless you arrest me.”
“I don’t want to arrest you. It’s not necessary. Just give me your details and then you can go.”

He went off a little way to consult on his cancer-inducing Tetra police radio. The second officer, a WPC, who was much more aggressive, continued the conversation with comments like:
“If you won’t give your details, we’ll just have you locked up.” I pointed out that the first police officer had just told me that he wasn't going to arrest me. "That was if you give him your details.”
“That's not what he said. Now he's going to arrest me because I won't give my details, but a second ago he said he didn't need to arrest me at all.”

She went ballistic when one of us decided to take some photos of the scene while we were waiting for the first officer to get advice from above. I get really fed up with police cameras filming gratuitously at demos, so although I felt sympathetic towards her argument that I was infringing her human rights by taking her picture, I didn’t feel inclined to delete it from the camera. The police must have miles of films of us doing harmless things like walking along roads and holding banners. She continued to shout at us until her colleague returned and announced that I would after all be arrested for alleged attempted theft. There was a scurrilous suggestion that we were intent on ‘becoming martyrs’ for the quarry cause. We chuckled. If we’d wanted to martyr ourselves, we certainly wouldn't have done it by trying to turn off a car engine. Anyway, it was a sunny day. We wanted to be out on the hills by lunchtime.

Just at the moment of the arrest, a member of the Hafod Environmental Group happened to pass by in her car. She stopped. The police cars were already blocking one lane of this narrow road. Now both directions were blocked. We tried to explain what was happening while the WPC continued to shout, this time about the road being blocked. The car was moved on, I was cautioned and we blocked the road some more while we discussed what I could hand over before being thrown in the cells. I passed over my bag but still had the camera round my neck, so once I'd been shoved into the car the police woman came over and screamed some more about her picture.

“She hasn't deleted it! It's still on her camera phone.”
“I don't have a mobile phone; it's a camera.” She was by this time getting dangerously angry. It isn’t my camera and I was worried about it being trashed, so I eventually offered to delete the offending picture, a silhouette of the WPC and my mate chatting. This took a while with the car door open and the road still blocked, while I carefully explained each stage of the deletion process and checked that the WPC could see that the picture was indeed being deleted.

I was then driven back to the site gates where a third police car had now arrived and where the victim of the alleged crime had turned up shaking his head. He didn’t want to make a complaint after all, so after some hanging around and discussion, and after I gave my name and address as required as an arrestee, I was de-arrested and allowed to go.

If things carry on like this, they’re going to need to bring in police reinforcements from other forces on double time to keep the quarry open. Three police vehicles called to the scene to deal with two protesters is a lot of resources.

So, please take your protests down there whenever you can, even if it’s only two or three people for a short time. You don't need to get yourselves arrested! Whatever you can contribute will all add up to help stop this illegal dumping.

The site is just off the A483 at Johnstown near Wrexham. Take the Bangor-on-Dee exit, turn towards Johnstown and you'll see the gates to the quarry on your left after 100 yards.