As Merseyside firefighters began a second eight day strike against the cuts proposed by the Fire Authority, the FBU published details of their own money-saving scheme. 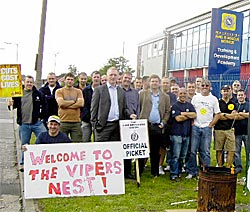 10am today marked the start of Merseyside FBU's second round of strike action. Unlike in previous disputes, there is no military cover, since the Territorial Army are involved in Afghanistan, Iraq and Kazakhstan.

The strike has been completely solid, with no FBU members crossing the picket line. However, a small number of former firefighters and office staff - who made their sympathy for the bosses apparent from the start - crossed the picket line and maintained a skeleton crew.

The £3.5 million cuts demanded by the government are a drop in the ocean compared to the amount currently being spent on oil wars. But Merseyside FBU have not broadened the dispute, and they now seem to have accepted that the cuts will come, and is trying to negotiate a settlement which does not affect front line fire rescue.

In his latest press release, Merseyside FBU secretary Les Skarratts called for 'savings through genuine efficiency gains and by using the financial reserves the authority has built up to help them through precisely this type of problem. But other ideas have arisen during the dispute which could also see more efficiency gains by cutting back on the corporate structure and senior managers.'

The corporate structure will not be cut by the senior managers who benefit from it, so the dispute must be widened-out, or the firefighters cannot win.

All trade unionists and anti-capitalists on Merseyside have to step up to the plate and start putting all their theories into practice. We must recognise that it is the profit system that has demanded these cuts, and the profit system which has taken the Territorial Army off to the Middle East to fight for control of oil. With the big Manchester protest at the Labour Party conference coming up in eleven days, we must use that media spotlight to highlight the link between wars abroad and cuts at home.

A good opportunity to make our voices heard will come this Friday 15th September, when a national rally organised by the FBU will take place in Liverpool city centre. The cuts in Merseyside are a taste of things to come nationwide, so every working class person in the country should support the Merseyside firefighters.