Around five thousand firefighters from around the country joined campaigners and members of the general public in Liverpool this afternoon, to show their support for Fire Brigades Union strikers on Merseyside. 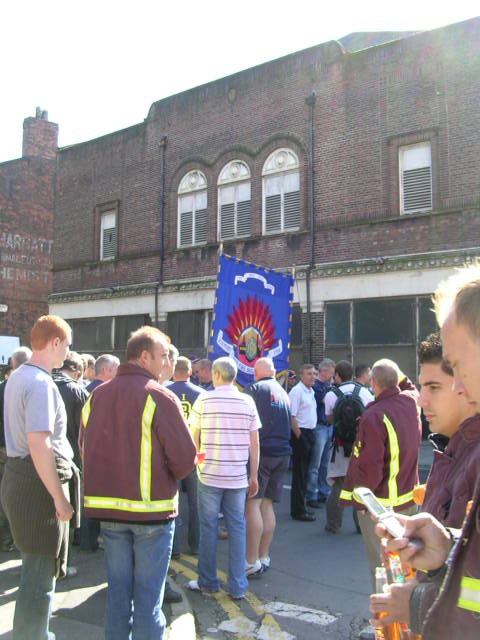 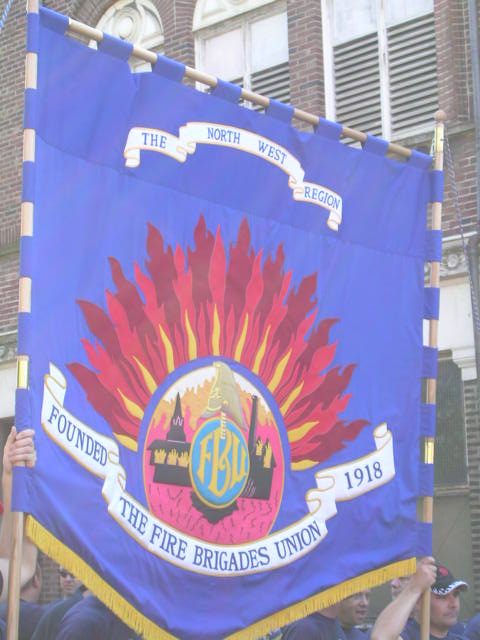 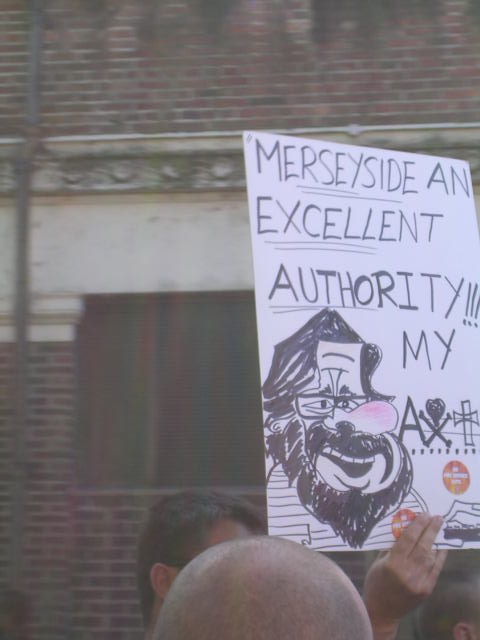 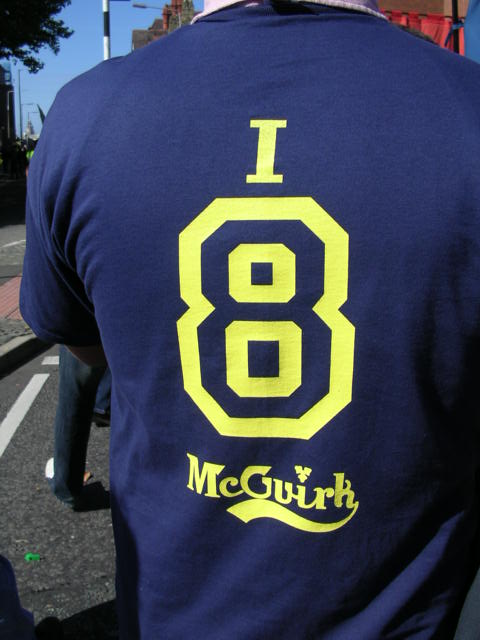 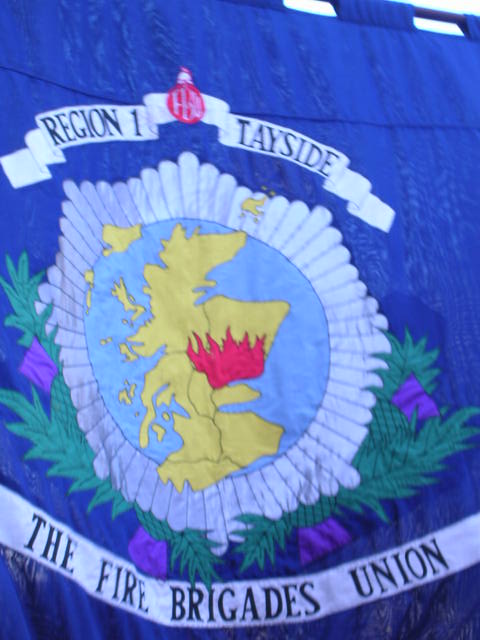 Support from north of the border 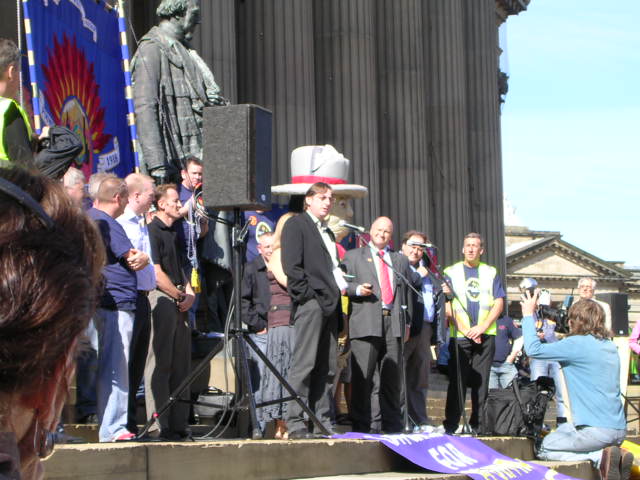 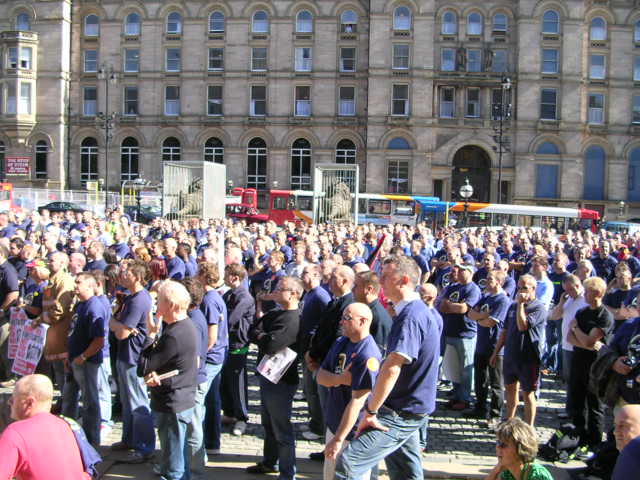 The crowds flocked to see the caged l... oh 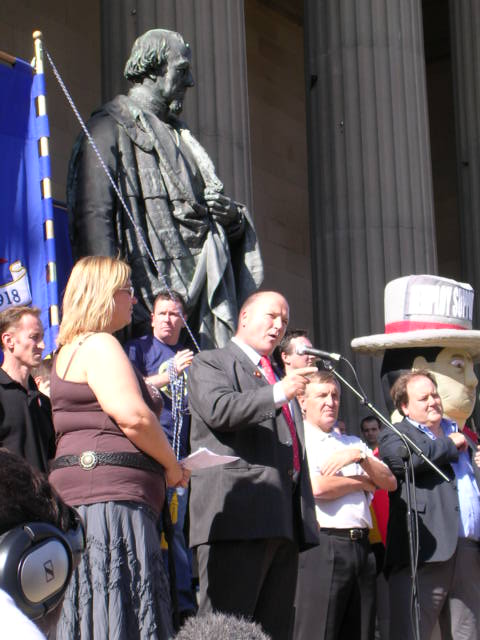 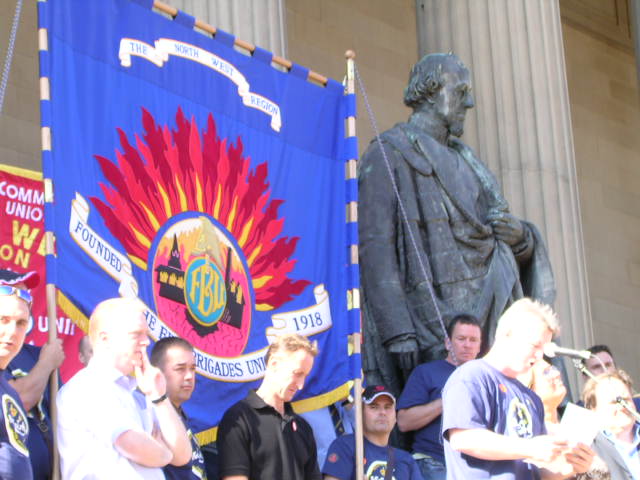 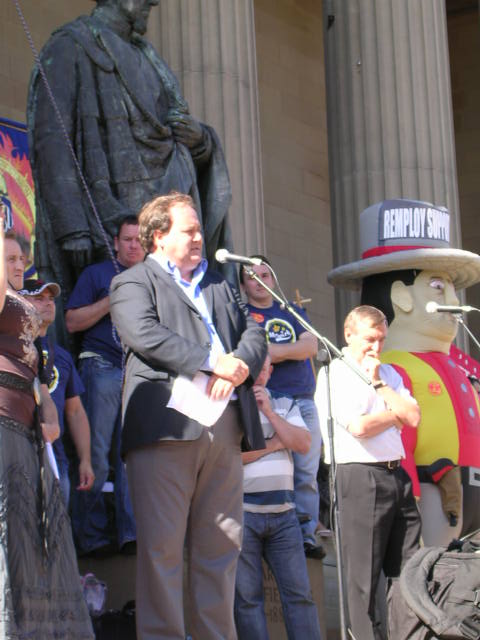 Billy Hayes: "Merseyside is not going to be a Capital of Cuts" 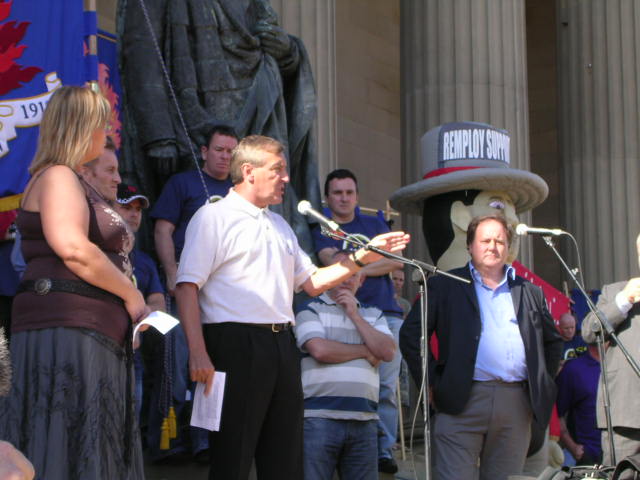 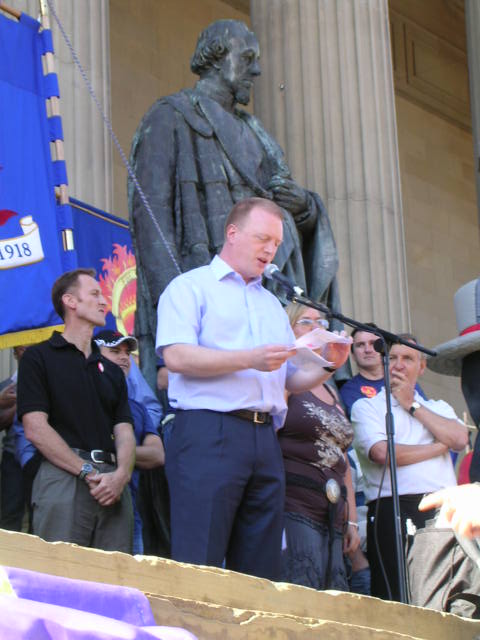 Matt Wrack: Authority will settle "or we'll be back ten times stronger" 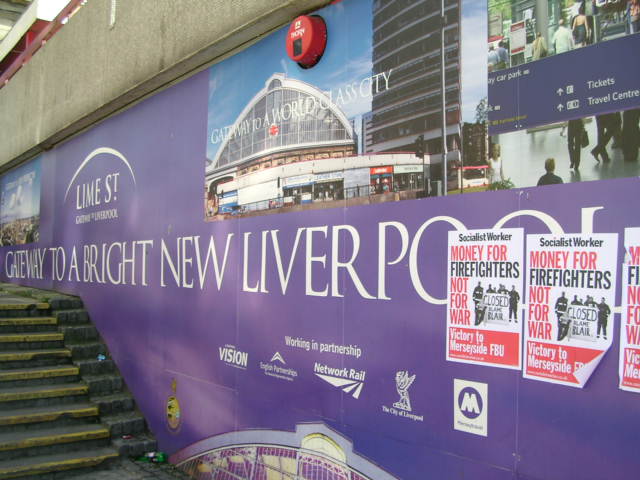 Seven weeks ago, Merseyside firefighters overwhelmingly voted to strike against the £3.5 million cuts proposed by the Fire and Rescue Authority and demanded by the government.

We are now four days into Merseyside FBU's second round of strike action. Unlike in previous disputes, there is no military cover, since the Territorial Army are stationed in Afghanistan, Iraq and Kazakhstan.

A huge crowd assembled in Myrtle Street, near the Philharmonic Hall. The colourful demonstration then marched around Liverpool city centre for about an hour, getting lots of support from passers by, and meeting no hostility whatsoever.

When the march reached St George’s Plateau on Lime Street, a guard of honour clapped home the banners from various FBU branches and trade unions expressing solidarity with the firefighters.

It was then time for the speeches. Merseyside FBU secretary Les Skarratts got a big ovation, and he read a message of support from local Labour councillor Joe Anderson, who opposes the proposed cuts. Skarratts added that it was a pity that Anderson’s colleagues in the Labour Party were not standing up for working class people.

Skarratts also condemned the 170 former firefighters who are providing a skeleton service. He claimed that “the dispute would be over in an hour” if they refused to cross the picket line, but the scabs had “sniffed a quid” and were siding with the bosses.

Rail, Maritime and Transport Union general secretary Bob Crow – who earlier this week caused a sensation by leading his delegation out of the conference hall during Tony Blair’s TUC speech – voiced his union’s solidarity with firefighters, and announced that the RMT had made a £5,000 donation to the strike fund. He called the firefighters “heroes” and urged all trade unionists to get behind Merseyside FBU.

Billy Hayes of the Communication Workers Union broadened the debate, reminding the crowd that the government has no trouble financing war. For that reason, he told the Authority and the government to “find the money” necessary for a decent fire service. As a Merseysider himself, he pledged that the region would not become a “Capital of Cuts” in the run-up to the Capital of Culture celebrations in 2008.

Tony Woodley of the Transport and General Workers Union raised the issue of the government’s anti-trade union laws. He also tore into those crossing the picket line, calling them “greedy, hungry bastards”. A huge cheer went up from the crowd, but Woodley suddenly looked embarrassed by his outburst. “Greedy, hungry people”, he mumbled, much too late.

FBU general secretary Matt Wrack warned that the cuts proposed by Merseyside Fire Authority are a taste of things to come nationwide. He declared it “an absolute tragedy that firefighters have to strike on Merseyside or anywhere else”, but authorities have an axe to grind against trade unionists everywhere. He warned the Merseyside Authority and Chief Fire Officer Tony McGuirk that “You either settle this, or we’ll be back ten times stronger”.

All trade unionists and anti-capitalists on Merseyside have to step up to the plate and start putting all their theories into practice, or all the fine words in the world won’t make the slightest difference. We must recognise that it is the profit system that has demanded these cuts, and the profit system that has taken the Territorial Army off to fight for control of oil, leaving Merseysiders with little cover during the strike. The big Manchester protest at the Labour Party conference is coming up in eight days. We must use that media spotlight to make the link between wars abroad and cuts at home.

To see more pictures of the day, visit