At the request of the European Social Forum and to coincide with World Habitat Day, a meeting to discuss housing and land rights issues entitled the Divided City was held by London Social Forum at Limehouse Town Hall in East London on Sunday 1 October 2006. Speakers and delegates came from across Europe and from further afield. 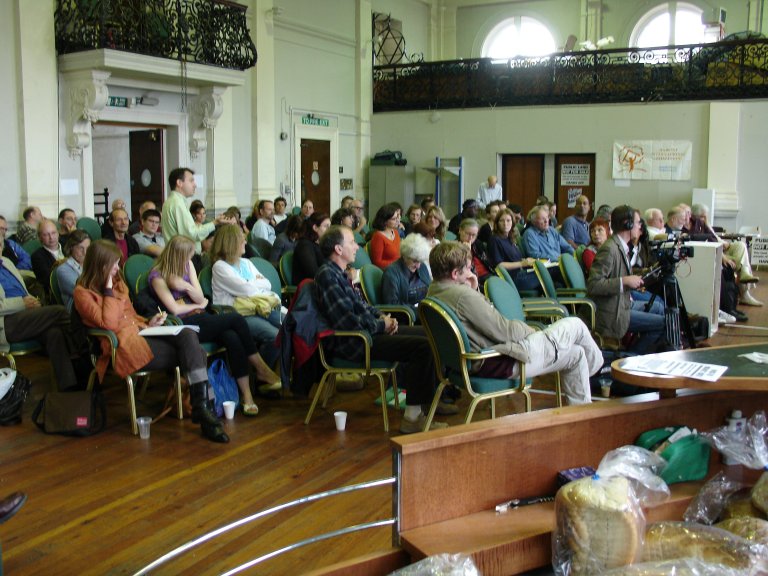 For future reference I have decided the best way from Waterloo, is to take the Jubilee Line to Canary Wharf, then cut back to Limehouse on the Docklands Light Railway.

Limehouse Town Hall is an interesting venue. A semi-derelict town hall in need of renovation. Where the Labour leader Clem Atlee made a speech or two, sandwiched between the City and Canary Wharf, the bastions of global capital and finance in London, located in Tower Hamlets, one of the poorest and most deprived areas in London.

The idea for the London Social Forum to hold a conference on housing and land rights arose from the European Social Forum, which in turn has its roots in the World Social Forum. The timing of the conference was to coincide with World Habitat Day.

Housing and land rights is not just a UK issue, speakers and delegates came from across Europe and beyond.

It has come as a shock in Germany, used as they are to quality public housing, to find that their public housing stock is being sold off. Worse still, that it is international finance and capital flowing from London, and ownership is now based in London. Housing is becoming an international commodities market, with future options to be traded. This is having a destabilising effect on house prices, forcing rents to rise to pay for profits, green space destroyed, and tenancies becoming less secure. Municipal authorities are happy to sell their housing, as it helps clear municipal debt. Whilst public debt is unacceptable, private debt is ok as it provides the opportunity for profit.

In the UK, social housing, former council housing, is being forced into housing associations, the new Rachman landlords. Under the guiding hand of the industry regulator the Housing Corporation, through mergers and acquisitions, housing associations, or Registered Social Landlords, are becoming mega-property developers. They are in all but name, private corporations, but have all the advantages of public bodies, but lacking any accountable, especially to their tenants.

If the GATS round of WTO were to ever succeed, the housing market in the UK would be liberalised and capital would be able to acquire the mega-corporate housing associates and RSLs. This will be aided and abetted by radical reforms to housing law being promoted by the Law Commission which will further deregulate the housing rental sector, making tenancy agreements more 'flexible' and turning social housing into a commodity.

As we have seen in Germany equity capital is willing if not keen to invest as it sees the opportunity for fast buck quick returns on investment.

Just say no to the privatisation of council housing. Once privatised you have no say on the future of your home.

Public housing belongs to the public. If it is to be given away, then it should be given to the tenants to run through their own appointed tenant-controlled directors.

Small-scale, community-controlled property ownership should also be considered. Model contracts for limited liability partnerships have been drawn up.

One way to cool the property market would be to introduce an effective property or land tax, similar to that in Denmark, but at a higher level.

In Denmark, citizen groups, under expert guidance, value property for the tax base. Unlike income, it cannot be hidden in offshore tax havens.

The London Olympics will drive people out of their homes and businesses. Those who will benefit will be the landowners, those that will suffer will be tenants who will see higher rents and be forced to pay increased taxes to pay for infrastructure that only benefits a few. One of the beneficiaries will be landowners. If the landowners are to benefit, should part of their capital gain not be paid back to the community in land tax?

One of the areas proposed for regeneration in East London is Queen's Market at Upton Park. The local mayor in collusion with property speculator St Modwen is wishing to destroy the popular street market for a superstore. It was claimed by St Modwen to be Asda. To the delight of the local community, Asda has pulled out. Opponents to the redevelopment are hoping to kick St Modwen out of town too.

St Modwen has an abysmal track record of destroying town centres and social housing, either directly or through one of their front companies such as KPI. Farnborough town centre has been destroyed by KPI, a Kuwaiti-financed, St Modwen front-company.

Supporters of Queen's Market are planning a demonstration.

Pathfinder is a neo-Labour/John Prescott flagship project that is destroying tens of thousands of homes in the north of the country. Public housing and land is being handed to developers, private homes are being purchased at knock down prices, all in the name of 'regeneration', in reality, providing a development opportunity for developers and the opportunity for social cleansing.

The Regeneration Game, a documentary produced by Mike Lane that looks at Pathfinder in Liverpool and its huge social costs, was distributed on DVD to those who attended the housing workshop. It covers many of the issues that were being raised and discussed. Those who were lucky enough to receive a copy (demand far outstripped supply), were asked to arrange public showings, run off copies and distribute (and hopefully promote discussion).

An update on the documentary: In the week leading up to the conference, home owner Elizabeth Pascoe challenged in the High Court in London on the grounds of abuse of her Human Rights the Compulsory Purchase Order served on her home and won her case. As a consequence, Pathfinder has ground to a halt in Liverpool.

Land and property ownership is not a problem restricted to the city, we must not forget, we also have a divided countryside, with many farmers being driven out of business, food is a commodity too. EU agricultural subsidies distort the rural economy and go to line the pockets of the wealthy.

The voiceless, the powerless, the dispossessed, are fighting back, through the courts, direct occupation, community ownership.

If we are to address social injustice, we need participatory democracy, not the current false choice offered between self-serving political elites, each in the pocket of Big Business, the proletariat reduced to election fodder.

Fairtrade coffee, courtesy of the Zapatistas in Mexico, and some very strange but nevertheless tasty vegetarian pasties kept everyone going.

On the long journey home, the opportunity was taken to read Boom Bust by Fred Harrison, one of the speakers. From my cursory read on the train it looks well worth reading and I am looking forward to finding the time to read it cover to cover.

Keith Parkins, A sense of the masses - a manifesto for the new revolution, October 2003