Families Against Corporate Killers in Liverpool

A group of about twenty people attended a meeting about the Families Against Corporate Killers (FACK) campaign on Thursday, 8th February, at the Liverpool John Moores University building on Clarence Street. 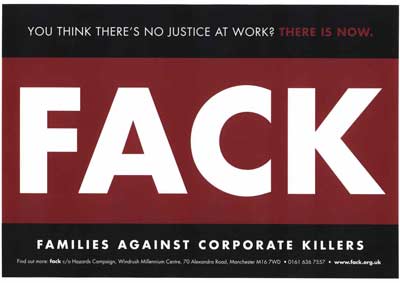 http://www.hazardscampaign.org.uk/fack), who are a group of families that lost relatives and loved ones through work-place incidents. This is very relevant to Liverpool at the moment, with construction firms rushing to get work done in time for the Capital of Culture festivities in just ten and a half months. Three weeks ago, a 31-year-old Polish worker was fatally crushed when a crane said to have been overloaded with concrete crashed on top of him.

Dawn and Paul Adams spoke about the loss of their six-year-old son at the then newly-opened Trafford Centre, Manchester in 1998. Samuel Adams was killed when a heavy balustrade fell on him. There were no risk assessments or safety measures in place, because work had been hurried to get the centre open in time for the pre-Christmas build-up.

In fact, as the meeting was opened to the floor and more people came forward with their stories, a pattern emerged of corners being cut in the name of profits, and working class people paying the price with their lives.

According to the Health and Safety Executive, 212 people died at work in 2005. But this figure does not count 384 members of the public and about 1000 killed in work-related traffic accidents. Thousands more die from occupational illnesses, such as asbestosis. Compare this to just over a thousand murders in the UK during 2005. Shame there are so many ridiculous murder dramas on telly yet next to nothing about corporate killers!

The ‘Labour’ government are finally putting their Corporate Manslaughter and Corporate Homicide Bill through Parliament, after spending ten years watering down their 1997 conference commitment. However, the Bill is so weak that the bosses union (the CBI) has backed it, and even Maggie Thatcher supported widening it in the House of Lords this week!

Under the new plans, the upper limit on fines will be removed, but no individuals will be fined or see the inside of a prison cell. Even to secure a fine, the prosecution will have to prove beyond reasonable doubt that senior managers ‘sought to cause the organisation to profit’. Unless there is paper evidence available, this will prove very difficult.

Speakers from various trade unions voiced their desire for a strong Corporate Manslaughter act, and pledged their support for FACK’s campaigns of lobbying and awareness raising. Some pledged that they would propose motions at future union meetings. One speaker from the Merseyside Hazards and Environmental Centre suggested that widening the campaign by taking direct action against employers, and involving members of the general public. Dawn Adams said she thought this was good idea if people were up for it, but many relatives would feel unable even to set foot in a place where they had been bereaved.

Brave as they are, this shows the limits of FACK’s campaign. By their very nature, they only draw their membership from relatives of people who are already, unfortunately, dead. They can’t extend their reach to the great mass of the working class population, beyond giving talks to rooms full of people who are already likely to know something about the issues. Workers need to organise at their workplaces, as do people who live near to dangerous workplaces. Something similar happened in London a few weeks ago, when another crane collapsed.

Governments have always sided with business interests, so our ultimate goal should be to abolish the profit system itself, rather than trying to take the edge off it with sticking plaster legislation.