Fifteen activists picketed Liverpool army recruitment on James Street yesterday, in an event organised by Liverpool Social Forum and the Merseyside Anarchist Group. We were marking four years since the invasion of Iraq began, but we were also starting a round of campaigning which we hope will break the Stop The War Coalition's stranglehold on the anti-war movement in the area. 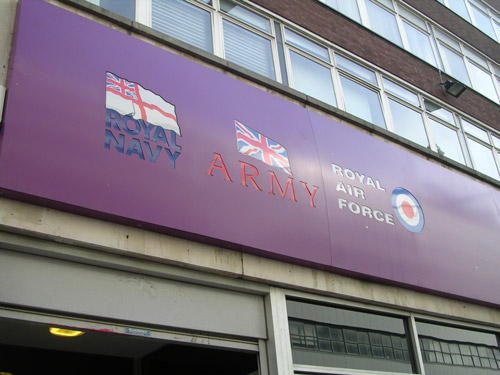 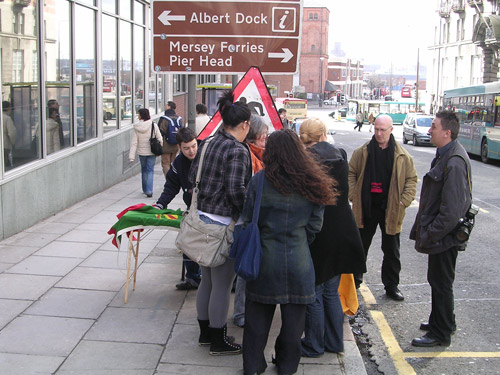 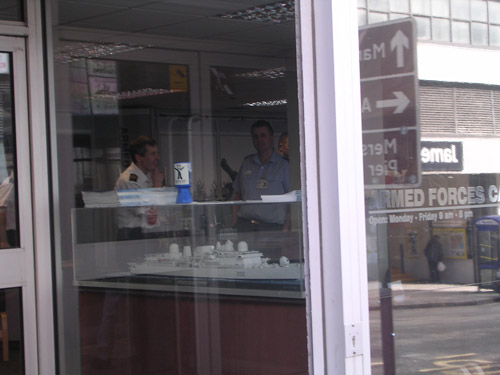 at first, we are an amusing sideshow... 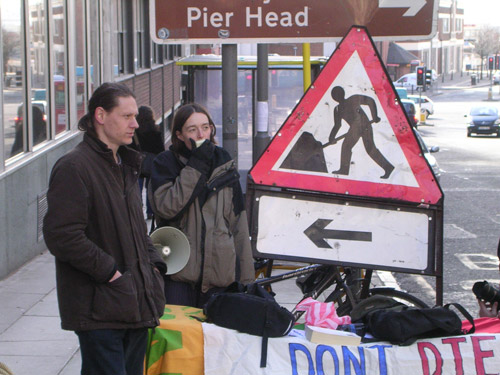 ...but then we make a racket, exposing their racket 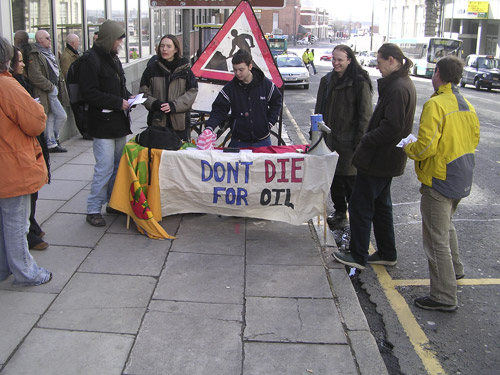 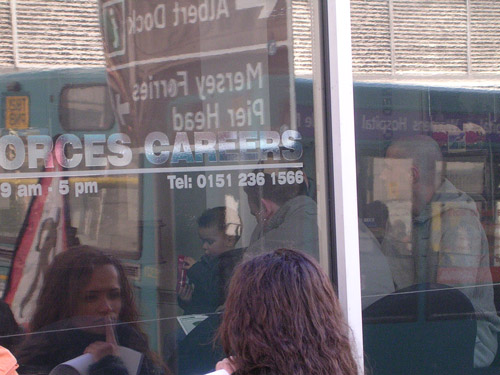 Our action began at 1pm, and lasted two hours. In that time we got loads of leaflets handed out to the young unfortunates who had appointments with army 'career officers'. On their way out, two lads told us they had decided not to join (including one who was being 'escorted' by his dad). Loads of noise was made on a loud hailer, which really seemed to annoy both the army recruiters and the professional bullies at the ever-unpopular Reed recruitment agency, which as fate would have it is next door to the army place. A woman from Reed came out and asked if we had "to make all that noise", because she was "trying to run a business and people were putting the phone down" on her. I told her that - regretfully - we really did have to make all that noise. "There's a war on", I explained.

Not surprisingly, the army folks weren't too happy about our demo, and were quite aggressive towards us. Could have been worse though, we could all have been in Iraq. Or Iran.

The police were called after about half an hour, and had clearly decided to try the 'good cop' routine, so they made no attempt to seize our material or stop the protest. After consulting with people from the recruitment centre, they asked why I was taking photos. I replied that I was taking photos because I wanted to, and that it wasn't against the law. The female cop then asked nicely (really!) if I would mind not taking photos of the recruitment staff, before going on their merry way.

It wasn't a perfect action, and there were many lessons learned for next time. But it was clear at our 'debrief' we all thought it had been worth it, and that it might just have been the start of something big.

Wars won't be stopped by petitions, marches or 'left' politicians. We need to organise in our streets and our workplaces. We also need to make the link between capitalism's demand for oil profits abroad and attacks on living standards at home.

So what are YOU going to do in the fight against war?

The Liverpool Daily Post's coverage can be viewed at:

Seeing your (great) action on Indymedia, I thought I'd point you towards www.counterrecruitment.org.uk/ -- a site to help networking counter recruitment activities in the UK. The idea of the site is to share material (leaflets, etc.) information on the armed forces (how they operate in terms of recruitment, etc.) and whatever else people might want to share on counter recruitment (in Britain).

Either way, keep up the good work !