Catalyst Media have published issue 10 of their FREE cage-rattling and rebel-rousing Nerve magazine. As always, the team have combined a dedication to social justice with a passion for art and culture, to create an issue which no self-respecting individual should be without. Look out for it at all fine local cafés, cultural venues, and especially News From Nowhere. 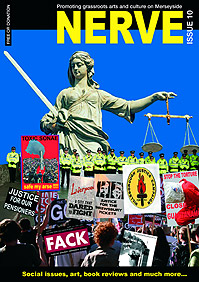 “Freedom is the freedom to say 2+2=4.” George Orwell, Nineteen Eighty-Four

Yes, dear readers, Nerve is officially dangerous. That doesn’t mean you’re going to get formaldehyde poisoning from reading it or there’s a pop-up knife in the centre pages. It’s just that certain rich people don’t like the truth about their business to be widely known.

In December last year, Kirkby’s own mass polluters Sonae put pressure on our website’s hosts, trying to get our site taken down! Apparently, a 2004 article by Steve Tombs and Dave Whyte was “having a damaging effect” on their reputation. Fortunately for us, the people of Kirkby, and any notions people might have about journalists pursuing facts, our hosts refused to be bullied.

So, in an act that isn’t anything to do with petty revenge, but more to do with ideas like ‘freedom’ and ‘justice’, we are dedicating quite a few more pages to rubbing the powerful up the wrong way! We have an update on Sonae’s atrocious health and safety record, an interview with ex-Guantánamo prisoner Moazzam Begg, and we examine the case of the ‘Shrewsbury Pickets’, who were imprisoned in 1973 after a blatantly dodgy trial. There’s also a look at the Hillsborough disaster, the West’s plunder of Iraq’s oil reserves, 9/11 and loads more! We’re not exactly ducking controversy!

As you’re aware, 2008 is fast approaching, so what better time for a profile of the man who owns a massive chunk of the newly developed city centre, His Grace The Duke of Westminster? But enough of the capital, how about some actual culture? Well as usual we’ve got loads of lovely stuff for you to feast 40% of your senses on. That means art and music, by the way.

Over the course of ten issues(!), we’ve tried our hardest to bring you something different with our features, interviews and reviews. We think we’ve succeeded, but there’s always room for improvement. If you can contribute an extra ingredient (or money), we’d be delighted to see an email from you in our inbox, via mail@catalystmedia.org.uk