Liverpool home care workers are considering strike action over a new 'zero hour' contract drawn up by the city council, which will cut their wages by up to 30%! 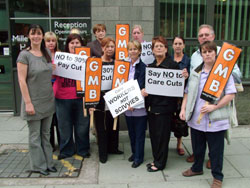 Carers claim that the cuts will effectively reduce their wages to below the national minimum wage of £5.35, once petrol, clothing, and communication costs are taken into account.

At a protest outside council offices at Millennium House in Victoria Street, carer Brenda Hicks told the Daily Post: “I already get paid less than the minimum wage, because the uniform I am wearing, I had to pay for. I bought my own mobile phone and I pay all my petrol.”

Marie Thomas from Norris Green said: “All of this has been really distressing for the service users and the carers.”

It is vital that the care workers do take industrial action, not only for themselves, but also to protect the people they care for. If the wages are reduced to such disgustingly low levels, the number of people willing to go into the profession will be dramatically reduced. Maybe that's what the council are hoping! That would leave more money for their corrupt schemes and overseas 'missions' on millionaires' yachts!