Up with the Posties!

Following failed talks with Royal Mail management, postal workers on Merseyside and across the country are taking industrial action against Royal Mail's cost-cutting plans, which are based on the European Union Postal Services Directive. A campaign of walkouts has been planned by the Communication Workers Union leadership, spread over various sites at different times. Liverpool hosted a regional march and rally in support of the posties on Saturday, 21st July. 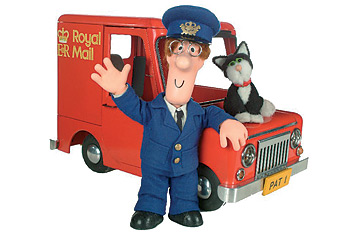 Two weeks ago, up to 130,000 postal workers took part in a 24-hour strike - the first in 11 years - to stop the Royal Mail's cost-cutting plans, which the Communication Workers Union (CWU) said would only mean cuts in members' pay and pensions, job cuts and more post office closures.

However, according to the CWU, the Royal Mail management were not really interested in meaningful talks on Wednesday, June 11th, and merely reiterated their previous 'offer' and refused point-blank to negotiate. In fact, chairman Allan Leighton did not even turn up for the meeting and simply joined via a telephone link. CWU General Secretary Billy Hayes commented: "We are consistently trying to negotiate with Royal Mail but, to be blunt, they have no interest. They refuse to take the dispute seriously – to the extent that Allan Leighton can only spare 45 minutes from his other commitments for a virtual meeting by conference call. The public will see through his half-hearted approach to stop disruption to the mails services."

The CWU said support for the initial strike among postal workers was "huge". A CWU press release said "No Royal Mail services operated as mail came to a standstill with close to total support for the CWU strike across the UK. Postal workers in every area supported the strike in overwhelming numbers. This support was at a level of 99% in big cities and all the largest Royal Mail workplaces and over 90% in all other areas of the country."

Once again, the Royal Mail management accused the CWU of "blocking modernisation" and "hurting the business and its customers with repeated strikes," portraying them as the ones causing this dispute. Royal Mail chairman Allan Leighton said: "Yet again, the union has refused to grasp or understand the harsh commercial reality of the market in which Royal Mail now operates and the consequences for all of us if we don't modernise - and do it quickly. Their decision to call another strike changes nothing and achieves nothing other than to damage the business and our customers and drive more of them towards the internet or to rival operators." Further, Royal Mail claimed that, "as ever, it is willing to meet the union at any time," never mind what had happened the day before.

Back in 2006, Royal Mail and the CWU had agreed that they would work together to tackle the impact of competition in the mail market, use government investment to introduce automation, improve efficiency, introduce innovation products and raise the value and status of postal workers' jobs. Royal Mail, however, ditched the agreement, refused to negotiate a pay resettlement and insisted on unilateral imposition of its cost-cutting business plan with mass job losses and cuts to workers' pay and pensions. Furthermore, the management has been deliberately misleading the public by claiming that the CWU want a 27% pay rise. The CWU insist they have never demanded a 27% pay rise. Royal Mail's offer of 2.5% increase in pay is, in reality, a wage cut as it falls below inflation rates.

According to the BBC, one of Royal Mail's biggest rivals, DX, had offered to help Royal Mail make its urgent deliveries over the period of the strike. The company told the BBC it expected to gain about £10m of business as a result of the strike action. DX describes itself as "the leading alternative to Royal Mail for next day business mail services, delivering over 1 million letters and packets every working day throughout the UK and Ireland." All this, of course, was not mentioned by Royal Mail when they reassured their customers that they had "well-developed contingency plans".

Since the Postal Services Act 2000 was introduced, over 1,000 post offices around the country have been closed down, paving the way for private companies to take over. There are further plans to close some 70 post offices in the near future and relocate the services into WH Smith stores. Since Royal Mail lost its monopoly status on post deliveries at the beginning of 2006, 17 private operators have entered the UK mail market, particularly in the more profitable business post sector. According to Royal Mail itself, the company has already 'lost' about 40% of its bulk mail business to private competitors, including recently a £8m contract with Amazon. Yet, operators such as TNT and DHL only handle the bulk transit between major customers and the main sorting offices, which is the easy bit, while Royal Mail is still expected to make the individual deliveries, but without the full amount of the postage.

But what can YOU do?

If you're not a postal worker yourself, you might feel like there's nothing you can do. But there are ways you can spread solidarity with the posties. Firstly, if you hear someone in your workplace or neighbourhood complaining about the inconvenience caused by the strike, put the posties' side of the story, and tell them to expect a much worse service if the strike is defeated. Secondly, you can pass on your best wishes to posties in person (when there's knock...ring...letters through your door), or by writing messages on any letters and parcels you may send.