The wildcat strikes at Royal Mail which began in Glasgow, spread across Scotland, and ended today also reached Newcastle, Liverpool and Chester on Thursday. And Hartlepool on Friday. 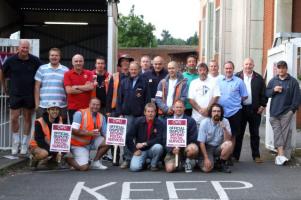 Liverpool:
Managers drove mail into the building, which resulted in a wildcat at the Liverpool Mail Centre when workers refused to unload the lorry. The wildcat was supported by Polish agency workers who refused to cross the picket line, and instead went to the pub.

Newcastle:
Mail was diverted from Glasgow to Newcastle during the wildcats there, and eventually found it's way onto ths sorting machine of a union rep who refused to touch the blacked mail. He was suspended by a manager and escorted off the premises, followed out by 200 other workers. The night shift picketed out the early shift, who in turn picketed out the night shift, and eventually the worker's suspension was lifted and charges dropped. They returned to work yesterday evening.

Chester:
Chester mail centre walked out from 7am on Thursday after three drivers were suspended for not crossing picket lines. This included almost 100% of staff from all functions including agency drivers. They returned to work at 4am this morning.

Branch union officials negotiated a return to work agreement at lunchtime which resulted in no action to be taken against the worker. The depot have also agreed that the job will be done by RM rules when they return tomorrow morning. Although not quite a work to rule these tactics have been very successful at delivery offices across the country, including Southend, Watford, South East London, Sevenoaks and South Devon.

Meanwhile, delivery offices were on official strike on Thursday, as the CWU announced a further two weeks of rolling strikes.