For obvious reasons to do with their chosen occupation, prison officers aren't exactly popular amongst radical activists. Many of us have been on the receiving end of their 'justice', or know people who have, or perhaps fear that we will in the future. All this is understandable and to be expected. 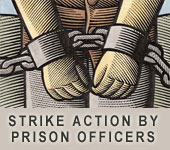 But damn, have you seen the news today? It's only this country's biggest wildcat strike since...well...long before my time anyway! Prison officers, like the nurses, have got a below inflation pay-rise (so effectively a cut), but unlike most trade unionists these days, they haven't wasted time with ballots and cooling-off periods etc. Instead, at 7am this morning, 20,000 of them in England and Wales walked out, and waited for the government to panic.

This afternoon, Justice Minister Jack Straw (you really couldn't make this shit up) got a High Court injunction ordering the prison officers back to work, and warning that they themselves were breaking the law. Outside Walton Prison, Liverpool, the local rep told the picket and the waiting media that he'd just got off the phone to national vice-chair Steve Gough whose reaction to the government's injunction was “tell them to stuff it up their arse”.

Straw has now caved-in and offered talks, so the action has been suspended. It seems unlikely Gough will tell Straw to stick things up his arse when they go mano-a-mano, but then he'll also find it difficult to present such a militant workforce with a shoddy sell-out.