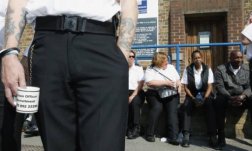 Brown’s initial response was to turn to the anti-union laws and get an injunction against the strikers. In response to a question about the prison officers’ action, he restated that public sector pay must be held down as an “essential part” of tackling inflation.

However the action has forced Jack Straw and Gordon Brown to the negotiating table. Straw is to hold emergency talks with the Prison Officers Association (POA) on Friday.

Colin Moses, chair of the POA, said, “The POA executive has decided in the light of the offer of meaningful discussions regarding the staging of pay, to lead our members back to work, irrespective of the threat of an injunction”.

Brian Caton, general secretary of the POA, disputed that the action was illegal. “I believe every officer has human rights, and they include the right to withdraw their labour,” he said.

Prison officers were banned from striking by a court ruling in early 1993, which found prison officers had powers and authority similar to those of the police and subsequently could not strike. That was written into law by the Tories in the 1994 Criminal Justice Act.

The New Labour government promised to repeal a ban on strike action among prison officers. It did this – only to sign a voluntary no-strike agreement with the POA in 2001.

Wednesday's strike came after a pay review body recommended a rise of 2.5 percent this year but the government decided that it should be staged, with an initial 1.5 percent rise followed by another 1 percent six months later. Overall, this kept the prison officers’ pay rise under Brown’s 2 percent public sector pay limit.

Brian Clarke, chair of Birmingham POA, told Socialist Worker, “Our pay awards are meant to be according to performance. There is a growth in prison population but not in prison staff, so our performance is increasing.

“Prison managers have received increases of £4,000 per year. That pisses me off. When they tried to serve an injunction on me this morning, I refused to take it.”

Every trade unionist should oppose the use of anti-union laws and welcome any assault on Brown’s pay freeze.

However, there are contradictions in the role of prison officers.

It is summed up by Cardiff prisoners chanting “you’re breaking the law” to the strikers.

Prison officers should have the right to strike and to a union and it is noticeable that the first response of Labour to industrial action was to head to the courts.

Getting relatively low pay for doing the system’s dirty work gives prison officers a collective identity and means they see themselves as workers.

But it should be remembered that the victims of the prison system are the 80,000 prisoners rather than the prison officers.

Those locked up in prisons are mostly poor and disproportionately black. Increasing numbers of prisoners suffer mental health and addiction problems.

Prison officers’ work, upholding law and order, frequently pushes them to accept the most right wing ideas and actions of the system. One of their main jobs is to control prisoners – and throughout the prison system, many officers have a proven record of racism and violence.

Some of the contradictions can be seen in the strike. In Liverpool the POA shop steward Steve Baines responded to the high court injunction by telling fellow strikers, “Tell them to shove it up their arse, we’re sitting it out.”

Yet when prisoners in the jail protested against their treatment, the POA members rushed back in to control the situation and end a roof top protest.

That one prisoner died locked in his cell in Acklington prison in Northumberland during the dispute should also be a reminder of the harsh reality of life in prisons.

Simon Basketter in Socialist Worker argued that the POA should be looking for fewer prisoners and better conditions in prisons as part of the their demands.

Traditionally prison officers – like their colleagues in the police – have been accommodated at the first sign of trouble. This is the POA’s first strike in 68 years. It is noticeable therefore that Brown’s commitment to neoliberalism means he is currently more interested in maintaining the public sector pay limit than keeping the POA onside.

The strike will have focused minds – as every strike does. The government quickly offered talks to head off the action.

There is a clear lesson for other workers here. If prison officers can take unofficial illegal strike action over Brown’s cuts and force concessions from New Labour ministers, surely other public sector unions must be able to do the same.

The prison officers’ strike is another sign of the crisis facing New Labour and another argument for workers pushing hard for action against Brown.