Beatrice who was living in Liverpool was 'removed' to Cameroon on 28th August after being held in Yarls Wood detention camp for many weeks. Beatrice resisted being forced onto the plane but she has told us that she was very badly beaten and kicked by her two 'escorts'. Her condition was so bad that the Cameroonian authorities refused to acccept someone who was in such a bad state into their country and put her on a plane the same night on a flight back to the UK. She remains in Yarls Wood and has had her mobile taken from her and she is very unhappy with her legal representatives.

Leafleting at St Lukes at the top of Bold Street on Saturday 22nd September 1.30 - 2.30 for Beatrice and others, as sadly Beatrice's case is not exceptional, many others suffer from these racist immigration controls. 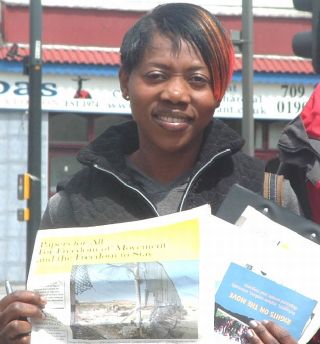 A journey to Cameroon is something Beatrice feared greatly as she believes that her life is at serious risk if she is returned there. Her campaigning against the ruling party of Cameroon has continued in this country with the Social Democratic Federation UK, who are based in London, and she genuinely believes that if returned she will be targeted by the government and suffer serious persecution and abuse.

After campaigning in Liverpool about her own right to asylum and that of other asylum seekers with the Liverpool immigrant rights campaigning group Asylum Voice – Beatrice Ketcha Guessie was arrested on the 5th July 2007. She was detained in Yarls Wood detention camp, and then held in the Orchard Hospital Luton for several weeks because of a severe psychological disorder. Beatrice was returned to Yarls Wood to face deportation to Cameroon on Tuesday 28th August 2007 at 6.40 a.m.

Beatrice was returned to Cameroon but that journey was worse than even she expected. Beatrice states that she was physically kicked and abused by her ‘escorts’, to such an extent that the Cameroonian authorities would not allow Beatrice to enter Cameroon. They stated that “She is in such a bad way we cannot allow her to enter this country in that state.”

For a country whose human rights record leaves a lot to be desired it clearly is a travesty for the British government to proclaim be a defender of human rights across the world.

ON CAMEROON - The government's human rights record remained poor, and it continued to commit numerous human rights abuses. Security forces committed numerous unlawful killings; they regularly engaged in torture, beatings, and other abuses, particularly of detainees and prisoners. Impunity was a problem in the security forces. Prison conditions were harsh and life-threatening. Authorities arbitrarily arrested and detained Anglophone citizens advocating secession, local human rights monitors and activists, and other citizens.
US Country Report on Human Rights Practices: Cameroon 2006
Today the Foreign & Commonwealth Office advises against travel to a number of areas in Cameroon.

Beatrice was put on a plane back to the UK on Tuesday 28th August at 10 p.m. She was returned to Yarls Wood where she remains today. Her mobile phone was taken from her making communication with her friends and supporters very difficult.

Beatrice came here to seek sanctuary from the harm she suffered in Cameroon However, not only was her claim for protection refused, Beatrice also became the victim of rape and abuse following her arrival here in the UK. Yet again she is the victim of assault yet she is deprived of her freedom and held in detention like a ‘criminal’.

We are campaigning for her to be returned immediately to Liverpool and that she is given the right to stay. We ask you to fax the home office with your support and demand her freedom and right to stay.
Please send faxes immediately to Jacqui Smith, Secretary of State for the Home Office asking that Beatrice have the right to stay in the UK and to be immediately returned to Liverpool.
Please remember to include Beatrice's Home Office Ref Number K1123945.
Fax: 020 7035 3262 (00 44 20 7035 3262 if you are faxing from outside UK)
Please let the Beatrice Must Stay Campaign know of any faxes you send:
Asylum Voice Liverpool PO Box 283, Liverpool L13 4WY
Email :