Peace Festival brings music & politics to heart of the city

On Saturday the CND-organised Peace & Ecology Festival, in St John's Gardens behind St George's Hall, proved a great attraction for crowds of people lured away from the usual consumer madness that is Liverpool city centre on a Saturday. 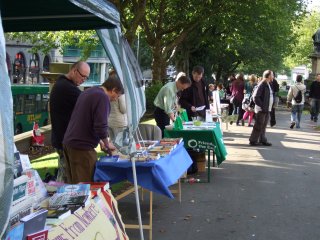 Some of the many stalls at the Peace Festival 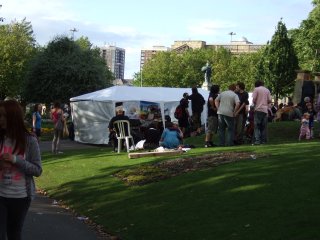 People chilling out to the music

Stalls from many different campaigns & activist groups made the most of getting their messages across to hordes of interested Saturday shoppers, while great music from local folk & roots artists created a chilled out atmosphere, perfect for enjoying the last of the summer sunshine.

This is the first time this event has been put on, and it's hoped that it'll be back next year.

I did some time on the Defy-ID stall

in between being a steward at Saturday's Peace and Ecology festival, which was a great success for Merseyside CND organisers. This event was probably one of the biggest cultural events here in Liverpool this year in the city centre, untainted by the nonsense of Capital of Culture, this free music and cultural event -organised voluntarily by local people- had something for everyone!

#1 I noticed the children were chalking lovely artwork on the pathway by the Woodcraft Folk stall, you'll see the relevance of that comment near the end of this posting...

My session on the Defy-ID stall was after Jerry's session on Saturday and it's getting more interesting -and also sinister- what people are now increasingly telling us, met a lot of people mostly parents who are rightfully outraged at the finger printing of school children. It was reported to me by students from St.Julies Catholic school in Woolton that students there are being finger printed to pay for their school meals without cash, when asked if any had refused they told me a fair few had -which is a breakthrough- those students are then told that they can't buy anything in the canteen at lunch time then (sort of a punishment really), therefore they have to bring in their own packed lunch, thus denying them a hot meal in winter time. I gave them extra Defy-ID leaflets on finger printing of school children and asked them if they would pass them on to the refuseniks, so they would know they aren't alone or without support. We also know that Southport college is also finger printing adult students, Upton girls grammar school on the Wirral is doing so too.

Here's a video I came across which illustrates exactly what's the system looks like in schools.

To date, more than 3500 schools and nurseries (manufacturer's official figure, given to the Daily Mirror) have fingerprinted and photographed 3/4 million children, ranging in age from 3 to 11; impressionable, trusting and naive.

The lie contained within the BBC report from Newcastle (whey aye) is that the school is only the second (reporter nearly said the only) school nationwide to have finger print scanning of children, this is untrue and misreporting, either that or 3500 schools and nurseries have put in equipment in just one year, from the quote below the link. The BBC are suppressing in news reports (Sunday Politics Show and this one in on BBC North East for example) the growing nationwide concern being expressed by parents over finger printing in schools without their knowledge or consent as Internet campaign group "LeaveThemKidAlone" know well, they offered the BBC a number of concerned parents for interview by the BBC Politics Show prior to their report a few months ago on surveillance Britain: www.leavethemkidsalone.com

We have to ask are children becoming the private property of the corporate state?

The 'say no to ID stickers' were popular amongst the teenagers who regularly spend Saturday afternoon in St.Georges gardens, with many worn on their shirts etc.

Was informed that there is something call 'Circle Time' being organised in primary schools, this is akin to collective counselling for small groups of children, I was informed of how such personal issues raised in these 'Circle Time' sessions are supposedly kept confidential -or secret- from parents, but obviously not from other pupils in the sessions. This idea of 'don't tell your parents it'll be our little secret' has been used by head teachers in some primary and infant schools to get children's finger prints on computer systems without parental knowledge or *legal* consent. However with the national computer database system previously called 'Children's Index' anything put on computer file stays now on computer for life, which can lead to state intrusion into private family life. As one person overhearing a parent explain suggested teachers are now becoming agents of the state.

http://www.youthagainstid.org/library.php?id=1 written by a friend of Liverpool Defy-ID, ex-worker of a local 'Sure Start' children centre, which are opening up everywhere, particularly in working class communities and you'll see where 'Circle Time' might fit into a wider Big Brother scenerio.

http://www.bloomberg.com/apps/news?pid=20601102&sid=aDkfYyePk7oA
Churches, mosques and scout groups may start fingerprinting volunteers working with children to confirm they don't have criminal records, the man in charge of introducing the first U.K. biometric identity cards said.

"While people are still nervous about fingerprints and still have a concern that fingerprints are associated with criminality, we're gradually moving away from that. It's amazing how many schools are starting to use fingerprints just as a simple mechanism for checking kids in and out.'' James Hall, chief executive of the Identity and Passport Service, August 2007

"It has been suggested that fingerprinting in schools is part of a concerted attempt to 'soften up' the younger generation for increased state privacy intrusion, including initiatives such as ID cards and DNA testing.'' The Information Commissioner's Office, July 2007

#1 UK police put 100,000 innocent children on DNA database Daily Mail, 23 May 2007
including two schoolgirls charged with criminal damage after drawing chalk on a pavement, a 13 year old girl who threw a snowball,
and a child in Kent who removed a slice of cucumber from a sandwich and threw it at another youngster.

Liverpool Defy-ID has raised the issues locally on finger printing in schools and what is a fundamental human rights issue -children's right to privacy- is it any wonder we now hear of New Labour calling for scrapping of the Human Rights act?

Everything contained within this article is true -that is to say- it is not a fictional script for a film or TV drama.

Next meeting of Liverpool Defy-ID is at the Liverpool Social Centre, Basement of 96 Bold St, Liverpool City Centre, next Thursday 27th September at 7.00pm to 8.00pm all are welcome...

I wrote the above article credited to anonymous 'ID Defyer'...

The article above credited to anonymous 'ID Defyer' was written by me, took me many hours on Sunday night, researching and typing, rewriting etc. A 'by-line' is usually the minimum a working class writer or journalist can expect from the capitalist press. My permission to re-post something taken from two email list to this site was not sought.

I've had a digital photograph copied off Liverpool Indymedia, that had my name and email address on it, it was then used by Channel Five for a commercial programme, without seeking my permission, that happens to be 'copyright infringement' in their case.