Che Guevara: The Man Behind The T-Shirt

About twenty people gathered in Next To Nowhere on the 40th anniversary of Ernesto 'Che' Guevara's murder/execution, to try and discover 'the man behind the t-shirt'. 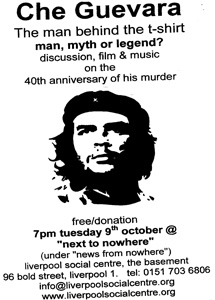 The evening commenced with a showing of 2004's The Motorcycle Diaries, a film which follows the very young Ernesto on a journey through South America in the 1950s. It shows him as a doctor rather than a revolutionary, but illustrates the dawning of his consciousness that South American people were being oppressed by imperialist powers.

Then we saw an hour-long documentary about Guevara, which took in his whole life, from his birth into a relatively wealthy family to his death at the hands of the CIA-backed Bolivian army. Though the feature was far too short to go into much depth, and contained such bland pronouncements as 'Che was a mystic. Che was a visionary', it was good to see the man actually moving and talking for once, as opposed to the 2D icon that everybody knows.

After that, we finished off with some drinks, whilst informally discussing the impact that Guevara made on the world (and vice versa). Debate centred on the appropriateness of violence as a revolutionary strategy (until I had to leave and catch my train!), and though nothing was resolved, everyone went home having had their preconceptions and ideas challenged.