This summer and autumn, Merseyside postal workers have been on the front line of action against Royal Mail's proposed new contracts, which threaten jobs, pensions and working conditions, whilst opening the door to a sell-off of the postal service. Now they've seen the mixed results of the ballot on the Communication Workers Union's sell-out agreement, and are pondering their next move. 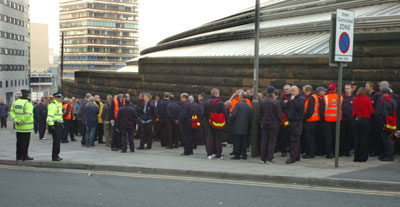 Posties in Liverpool and Birkenhead were among the most militant in the country, taking illegal 'wildcat' strike action for over a week, after they got back from an official strike to find Royal Mail had unilaterally changed their working hours.

When representatives of Royal Mail and the CWU finally reached a deal, it quickly became clear that union bureaucrats had caved-in to pressure from post bosses on one side, and the government on the other. The new deal contained almost exactly the same terms that CWU general secretary Billy Hayes had denounced as a "carve up" by Royal Mail bosses and their "rich mates", so rank-and-file posties have been expressing dismay and anger.

CWU members have now voted on the proposals, and the results were announced on 27th November. 64% agreed to the new contracts, with a 64% turnout. This means that 59% of eligible voters did not back the deal!. If there is resistance to the stitch-up, we can expect it to be particularly strong on Merseyside, and postal workers will need public support if they are to save a service we all rely on.