The calendar records and celebrates the region’s rich tradition of radicalism and dissent. History is for the most part written by and for the rich and powerful and ‘official’ histories of Liverpool are no exception. But an essential part of our history are those people and groups who put themselves on the line for their communities and what they believed in and who ‘had a go’ without waiting for society’s approval. 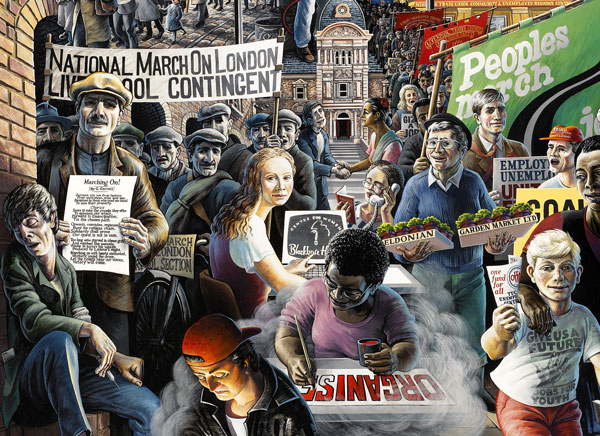 On each of the twelve monthly pages, individual dates are recorded as the anniversaries of protests, occupations, boycotts, publications, marches, uprisings and festivals between 1775 and 2006. These include:

Each month’s display is accompanied by a photograph or original artwork including:

· February - Right to Work marchers of 1972 · June - Liverpool-born Jim Larkin (who inspired workers on both sides of the Irish Sea) with National Union of Dock Labourers. · October - Liverpool’s ‘Tatlin Tower’ – the speaker’s podium erected in 1973 at the Pier Head to commemorate workers’ international struggles and ‘disappeared’ by Liverpool City Council in the early 1990s.

The calendar forms the centrepiece of the magazine’s 11th issue. In the surrounding pages are articles and reviews including an account of Paul Robeson’s 1949 visit to Liverpool and a tribute to seaman activist John Nettleton who along with Alan O’Toole discovered the pauper’s grave of Robert Noonan (author of The Ragged Trousered Philanthropists). On the cover is a mural by local artist Stok entitled ‘Liverpool Radicals, Peoples Champions’.

The magazine is independent and is distributed free of charge. Outlets include News from Nowhere bookshop on Bold Street, cafes, libraries and cultural venues.