With new phase of IWW campaign against 600 job cuts, the wobblies launch massive recruitment drive. The centre in Liverpool is scheduled for closure by NBS bosses. The IWW is going to stop them. 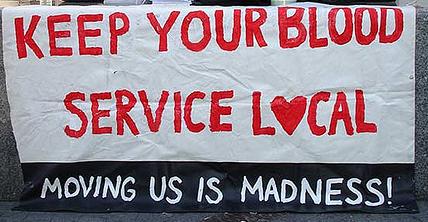 As part of the IWW's fightback against NBS bosses the IWW has set itself the ambitious task of bringing more people on board to the Save
Our National Blood Service campaign.

Wobblies aim to bring the number of public supporters of the campaign to over a thousand by the end of the week, by signing up hundreds of
new campaign participants on the social networking site facebook and through increasing the volume of campaign emails, public stalls and public
visibility.

"This is an ambitious drive, but we think we can do it!" comments campaign activist and wobbly Joe Rutherford.

"We need to build momentum for our big assault in January. It's crucial to the campaign so we are devoting a lot of time to this objective." Joe continues.

So far the number of people joining the campaign has really begun to take off. With less than 500 supporters in email contact last month the campaign now boasts nearly 750. With every new member wobblies contend that the community and mass public campaign grows in strength. A review is currently taking place into the cuts, which will be published in January. The IWW believe that building support for a major fightback in January is crucial to the success of the campaign

"We can reach our target of 1000 members by the end of the week. When we do we can really start to increase our impact on a national scale. This campaign is getting stronger every day. This is massive, but we need to be ready to take serious action in January. We are going to win this campaign, so are going to put ourselves in a position to do that."

The IWW NBS job branch can be contacted at