As the sun rises on Liverpool's European Capital of Culture reign, it's time to look at the positives and negatives that have come the way of people in the city since the award was made in June 2003. 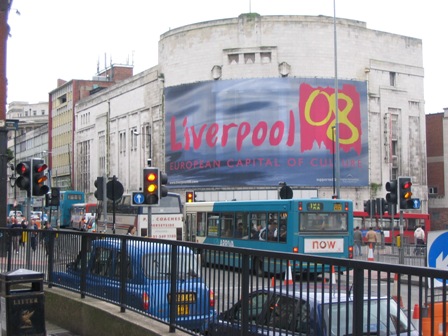 On the plus side, some extra set piece events are coming during the year, which some will be fortunate enough to see. And...that's it! The culture side isn't going to be anywhere near the standards of the more democratically-organised Cork 2005.

As for the rest of us, the last few years has seen attack after attack on our living standards justified in the name of 'capital of culture' (which is actually more to do with capital). For example, a large part of the city centre has been privatised, and handed over to the Duke Of Westminster. This means top brands are coming, which few Liverpudlians will be able to afford, and the city centre will look even more like a 'clone town', because many smaller businesses have been turfed out, or are struggling to keep up the rent. As are many people living outside L1, as landlords have seized the chance to make more money. That's not to say residents are getting any better housing, in fact vast swathes of working class housing is marked for compulsory purchase and demolition, so less maintenance is being done in those areas.

The city's green spaces haven't been spared from capital's ruthless expansion. The former garden festival site could be buried under luxury flats if developers get their way. A determined local campaign has held them up, and they haven't even got planning permission yet, but that didn't stop them illegally felling trees last March. Parks are also being eaten into, a situation which will only get worse if Liverpool FC's planned new stadium tears through large parts of Stanley Park.

In 2003, central government gave Liverpool City Council a large cash injection, but now it is claimed they are £29 million short, and need £7 million just to fund normal services. Unless Gordon Brown coughs up, the extra funds will come from council tax payers, but council leaders have their snouts firmly in the trough, as documented in the blog of an anonymous council insider.

As an article on the Liverpool Times website observed:

With all this in mind, Liverpool people are not likely to remember 2008 for the impact that culture made on their lives. Debt counsellors in the city are reportedly snowed under with clients, as people struggle to keep up with repayments. Capital of reposessions anyone?