On Saturday 12th January, Liverpool activists from a variety of groups, campaigns and political persuasions held an unauthorised march through the city centre to assert their freedom to protest, in the face of increasing harrassment from the police and city wardens. It was also a protest against plans by central government to severely restrict the right to demonstrate nationwide, by amending the Serious Organised Crime and Policing Act (SOCPA). 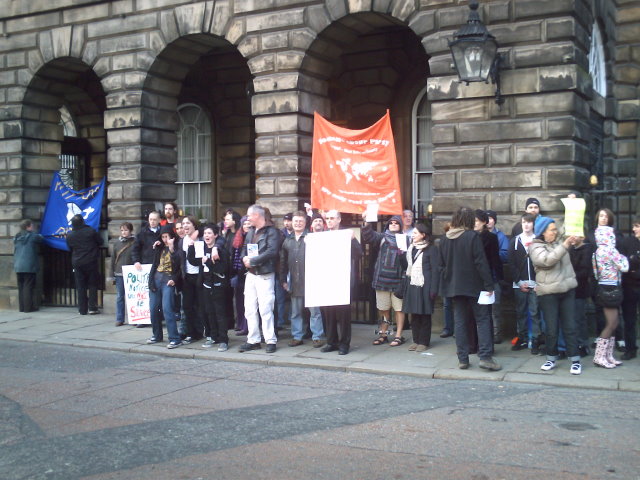 The police and city wardens have been stifling protest by verbally bullying and threatening to arrest compaigners who are LEGALLY giving out leaflets or holding stalls in the city. One example is the animal rights activist who was roughed up by the police for handing out leaflets on Mathew Street (see previous posting.) Two weekends ago, the Fight Racism! Fight Imperialism! group had their stall surrounded by five city wardens who threatened to arrest them if they didn't move.
The marchers - who had not applied for "police permission" - went from Mathew Street through the city centre to Municipal Buildings, where they delivered a letter of protest to Warren Bradley, the leader of the city council. Then the march continued to Merseyside Police Headquarters in Canning Place, where another letter of protest was handed to the Chief Inspector, Martin Smith. The demonstration wound back through the city centre and ended in what has become a regular Saturday afternoon protest outside Cricket, the fur-selling shop in Mathew Street.
In spite of lacking authorisation, we were not stopped, followed, or held up by inquisitive police officers at any point. We suspect they had got wind of the protest beforehand - coppers read websites too! The two coppers who met the demonstration outside Cricket could not have been pleasanter. They asked us to "assist them" in keeping the street clear for pedestrians to pass through. This is quite a contrast to their previous attitude to the anti-fur protest.
We are not fooled. Maintaining our right to campaign will take more than a single protest march. It will take constant assertion of that right.
Liverpool City Council employs the city wardens and controls the police locally, and deals with complaints about them. Anybody who has anything to say on the subject can email the city council leader Warren Bradley at:

warren.bradley@liverpool.gov.uk.
If you want to reply to the Home Office consultation on managing protest, you have until 17th January. You can read the consultation document at www.homeoffice.gov.uk/documents/cons-2007-protest, and get more information from www.repeal-socpa.info.

A reminder why those of us who marched in Liverpool City Centre felt the
need to do so. I don't recall this being reported on the BBC news over
the weekend.

The following link contains the article that follows

Brian Haw said he was "dragged" by police into the police van
Seven people were arrested, one of them anti-war campaigner Brian Haw, during a demonstration outside Downing Street.
Mr Haw, who has been encamped in Parliament Square since June 2001, was filming the protest when arrested.

He accused police of using "violent and humiliating force" but said he would not be making a complaint.

A police spokesman said 100 people took part in the march against the Serious Organised Crime and Police Act (Socpa), which limits protests near Parliament.

Mr Haw, from Redditch, Worcestershire, said: "I was filming the students lying down in the road when one officer stepped forward, as I was walking back, and pushed the camera with his hand. It struck my face."

He said he was "dragged" by police into a police van, who pushed "my head close to the ground with my arms handcuffed high above my back".

A Metropolitan Police spokesman said they were forced to act because the march contravened the Socpa legislation.

"They did not seek authority from the Metropolitan Police Service for the demonstration," he said.

Well done for marching. From the photo it looks like the march was well supported. If we don't all stand together on this issue of democratic rights then the state will pick us off group by group, campaign by campaign. When we had a rally for democratic rights last year then the police didn't come anywhere near it either. They know that solidarity is strength as much as we do.

We are facing police harassment in Newcastle as well. The police say that it is illegal to put a collecting tin on political stalls without a permit (which can't be obtained by political campaigns). Now they have sent four activists from Fight Racism! Fight Imperialism!/Revolutionary Communist Group summons to appear in court, charged with illegal collection. Ridiculous! Please support us by signing an online petition to Newcastle City Council. We are planning further protests, so email FRFI for more info (