On the evening of Saturday 12 April 2008, there will be a demonstration and street party in Manchester for the FREEDOM OF MOVEMENT FOR ALL and to DEFEND AUTONOMOUS SPACES. This forms part of the international days of action in defence of autonomous spaces that have been called for this weekend ( 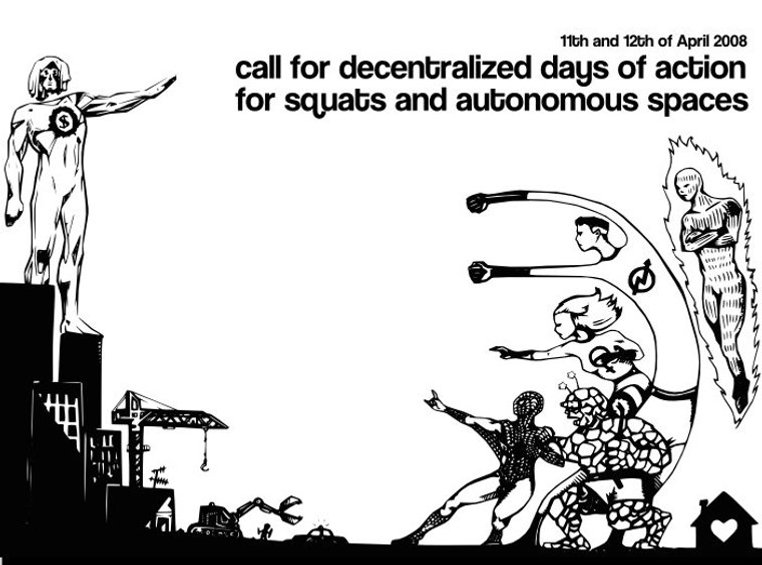 The demo has been called by Manchester No Borders in collaboration with a variety of other groups from the city. The Day's events will also include a fayre in the city centre, street parties, squat parties and workshops in occupied spaces.

For the demonstration and street party assemble by Urbis, next to Manchester Victoria railway station, between 5 and 6pm.

Support would be greatly appreciated!

With sky-high rents forcing the poor to the margins, the creeping privatisation of public space, and a council willing to close down vital community services and simultaneously sell off swathes of the city centre to luxury property developers and retailers, there has seldom been a time when fighting for autonomous spaces in Manchester has been more important. The closure of the Basement social centre last May dealt a heavy blow to autonomous political and cultural organisations in our city.

No Borders, No Nations

It might at first seem odd for a group principally associated with aiding refugees and migrants to have called this action. However, by borders we refer not simply to the physical apparatus preventing the movement of people between nation states. There are other borders that prevent the free association of people within the city. The restrictions created by capitalist social relations and the property system abolishes common ground, segregates according to wealth and ownership, and in doing so throws up borders all around us.

Enclosure has always been a central element to capitalism; the fenced boundaries erected on the English countryside so many hundreds of years ago one of its earliest manifestations. Control of the movement and association of people remains - whether at the micro-level of our inner cities or the macro level of international migration – a central concern for the survival of state-capitalism. We should fight to create spaces in Manchester not simply as bases of resistance or celebration (though we hope they can provide this), nor to create ‘autonomy’ from capitalism (there is no autonomy within capitalism), but to go some small way to encouraging a departure from this system of control.

For centuries, people have migrated across borders and have occupied spaces to live in as a way to take control of their own lives. Both chose to leave their own pasts, in an effort to claim autonomy over their future lives. We are taking control of our lives when we squat an abandoned building or when we move away from poverty, repression or war hoping for a better life. This struggle for self-organisation and social autonomy brings migrants and squatters into inevitable confrontation with the existing social and political system. Self-organisation does not mean living outside of society. We want to live in it but according to our own rules. This is where our experiences converge. We want to emancipate ourselves from the capitalist processes that govern our city and our lives, without turning our backs to society.