Free public transport for all? Liverpool activists are having a laugh!

Early on the morning of April 1st, a group of Liverpool activists carried out a banner drop and distributed leaflets and dummy tickets outside Lime Street Station, telling the public that they could travel for free. 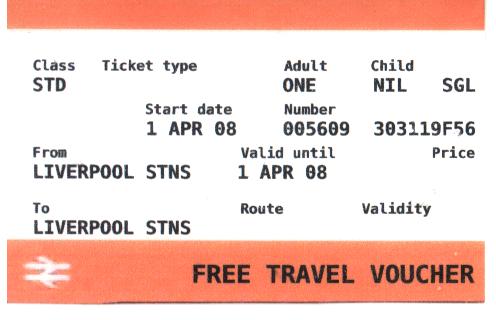 A banner reading “FREE TRANSPORT FOR ALL – DON’T BE A FOSSIL FOOL” was hung from scaffolding above the station, and fake tickets marked “Free Travel” were given out, accompanied by a leaflet entitled “Only Joking”, which called on people to take the decisions on improving public transport into the hands of those who run and use the service, not the companies who profit from it.

“Prices are going up massively,” says the leaflet, “at a time when the government says they want people out of their cars so they can cut down on the use of fossil fuels! Instead, the government are cutting price subsidies and letting companies charge what they like!” It questions the 3.8% price hike implemented by Merseyrail last year, pointing out the lack of a corresponding improvement to the service or to the pay and working conditions of Merseyrail’s employees.
It was not long before two Transport Police and a Community Support Officer took an interest, and upon reading the leaflet they initially seemed satisfied (provided one activist moved a full five inches to her right in order to be clear of the station boundary.) Five minutes later, though, they returned, with the realisation that, though it had slipped their minds beforehand, the activists were, in fact, breaking the law. One of them wore a trenchcoat, and slapped his forehead with the heel of his palm before turning back and announcing there was just one more thing (I may be making that up). What had suddenly occurred to them was that some commuters may not properly understand the phrase “Only Joking” and try to use a clearly home-printed joke ticket as if it were the real thing, which would make the activists guilty of “Making or supplying articles for use in frauds”, under Article 7 of the Fraud Act (2006) and mean they had to be arrested; as nobody wanted that kind of paperwork, the police advised that it was best for all concerned if they moved on.

After consultation, the activists decided to take that risk, and the rest of the leaflets were distributed without incident. Amusing as this is to recount, it is yet another example of the disturbing rise in police harassment of peaceful protesters and campaigners in the city centre.

Meanwhile, carbon emissions rise along with public transport prices and it is cheaper to drive to Manchester than to get the train. How long are we going to suffer these fools?