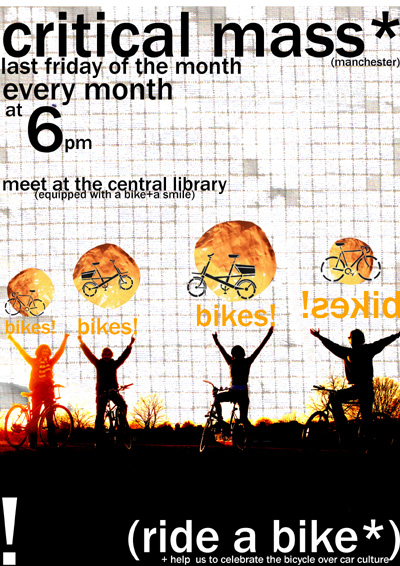 A totally ace bike ride around our city to meet other cyclists and ride
without purpose on our roads for a bit...it's such a nice and sociable and
fun way to spend a Friday evening on a bicycle..wow. so ace. and now we're
getting bigger and bigger..someone said they counted at least 100 people
on the one last month, how ace is that?!!..come and be part of our lovely
friendly cruise around..to collectively enjoy the beautiful experience
that is riding a bike.

We're probably gonna go for a beer at the sandbar afterwards and then some
of us are riding on to stockport to go to the Stockport Beer & Cider
Festival at EDGELEY PARK, Stockport..if you want to join us it would be
ace.

"...it's brilliant. Usually I'm charging around on my bike, getting where
i need to go as fast as i can. Critical mass is different. It's about
enjoying riding. It's the most relaxed ride around the city I've ever had.
Where all my worries and fears float away. And I've met some lovely people
too"

"I was scared it would be some angry bike militants but everyone is so
friendly and the ride is fun no aggro at all. See you next month!"

"it's quite something to have that many peeps riding round at once."

"Critical Mass sometimes has a reputation for being an angry rabble of
cyclists that want to string up any car drivers they see. This is not true
of Manchester Critical Mass, it is a fluffy mass of people that like to
have fun on bikes, there are often have children with us and a bicycle
sound system to add to the party fun atmosphere. As well as being fun and
a social event it is also to show how great a car free city will be. This
is achieved every month by showing motorists an alternative, yet critical
mass Manchester doesn't aim to annoy drivers we want them to join us.."