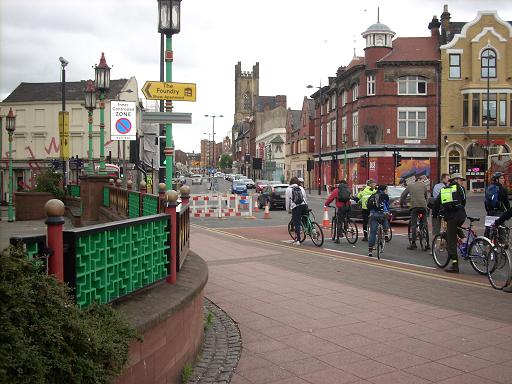 although small in numbers we managed to own the roads quite sufficiently, motorists didn't go too mental until we reached dale street, at which point a game of bike/car /taxi dodgems ensued, to a chorus of "get a job!", "get a wash!", and, bizzarely, "you lazy bastards!", (comin from a fat man in a taxi this was quite surprisin, altho as they overtook he seemed to be encouragin us to ring our bells....at least i presume that was the hand movement he was makin).

we ended our jaunt at nextTOnowhere in plenty of time (sometimes technical hitches can be a positive thing), for the showin of 'on the verge', a film documentin the 'smash edo' campaign.


it was particularly poignant that these two events coincided. it was whilst cyclin to the 'smash edo carnival' on june 4th that committed activist marie vesco was needlesly knocked off her bike and killed.


until cyclists are considered to have full road rights these senseless events will continue. critical mass has developed to draw attention to the dangers faced by cyclists and the irresponsible behaviour of many motorised vehicle drivers.

so, come and join us!
meet at the chinese arch (nelson st), at 6pm every 2nd friday of the month.


or, pop over to manchester to join their critical mass,
meet central library, 6pm 27th june