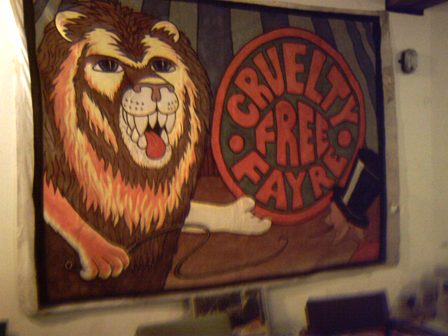 The theme of the day was raw food and there were a range of tasty snacks to sample, from sprouted seeds to dried berries, olives and salads. There was even raw chocolate and raw 'cheese'. I was myself interested in examining the tiered transparent tub, designed specially for sprouting seeds. I've always used a jam jar myself, but they don't work as well.

This is the third vegan food fayre held in Liverpool in the past two years, but the first at the social centre. It was the best-attended yet. People who came were able to get information not only about eating vegan food for good health, but also to protect the environment and avoid the exploitation of animals.