Protesters showed their anger at a Wirral Council meeting last night, as the cabinet approved massive cuts to local library and recreation services. 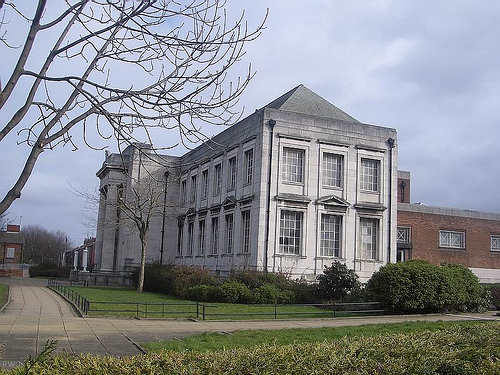 Wirral's 'Strategic Asset Review' has been pushed by Council leader Steve Foulkes and Chief Executive Steve Maddox, to 'support regeneration' - code for focussing on the needs of business in the Borough. The Review promises an initial investment of £20 million, to provide eleven new buildings, alongside the closure of twelve libraries (including Birkenhead Central Library, pictured), two leisure centres, Pacific Road Theatre and the Wirral Museum at Birkenhead Town Hall.

A crowd of hundreds reportedly gathered to protest the cuts, and as the cabinet meeting got underway, Foulkes was interrupted by shouts. Placards were displayed, reading 'Wirral Council’s contribution to National Year of Reading – close the libraries', and 'The leisure peninsula? Oh yeah.'

Foulkes claims that changes will result in "better but fewer" buildings, and that “doing nothing is not an option”, because the "old, energy inefficient buildings" are "no longer fit for purpose". However, this idea does not stand up to scrutiny. It would certainly cost less than the £20 million initial outlay to refurbish buildings where they are needed, and indeed when the Review was launched, the stated rationale was to make £9 million worth of "savings". The aim is to cut services that are not considered profitable, and the true cost of this will be borne by the working class people who depend on them.

Local Conservative leader Jeff Green is positioning his party as opponents of the cuts, which are being imposed by the Labour/Liberal Democrat coalition. However, it would be foolish to trust the Conservatives, as they would face similar pressures should they come to power. The cuts - and cuts like them around Britain and the world - could only be stopped by united and determined organisation by council workers and others, who would have the overwhelming support of the people who use these essential services.

Typical of this rubbish council

Wirral Council are a disgrace. I don't know of anyone on the Wirral who are satisfied with them and now this! A couple of weeks ago they wanted to ban dogs walking on beaches (perhaps they should look at why there are no dog bins anywhere) thus punishing the responsible dog owners, luckily this was not followed through. I get very little from my council tax, not even my bin emptied weekly,however, I do use my local library. I think council staff should be paid less that would save plenty, they are on inflated salaries which one can see from their job ads in the local paper, and how about performance related pay for the idiots at the top? Incompetent and useless, that is my opinion and I am a Wirral council tax payer.