The British National Party were back in town on Saturday.In what is a gross insult to those who died fighting against fascism in World War II, these neo-nazis were allowed to hold a rally next to the war memorial on St. Georges Plateau. 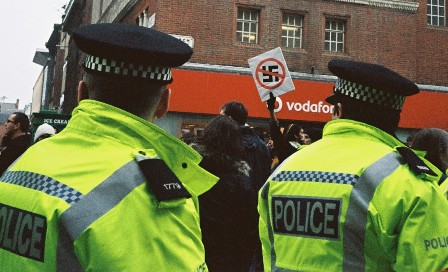 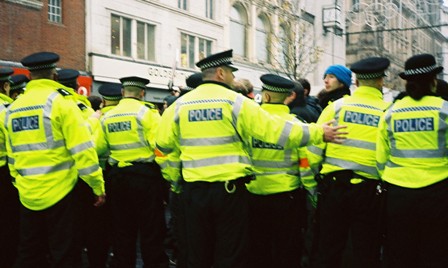 The police sandwich the protestors 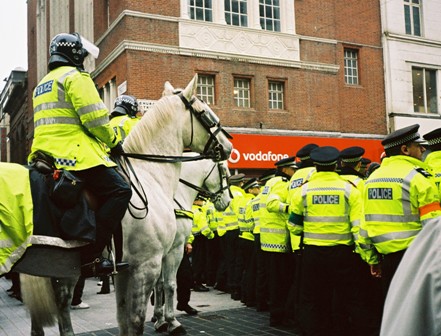 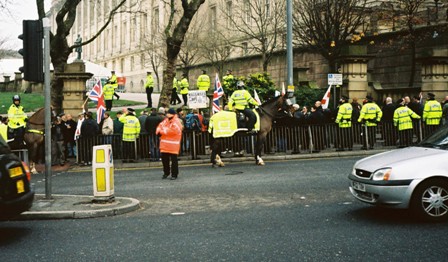 the Queen doesn't have this much protection! 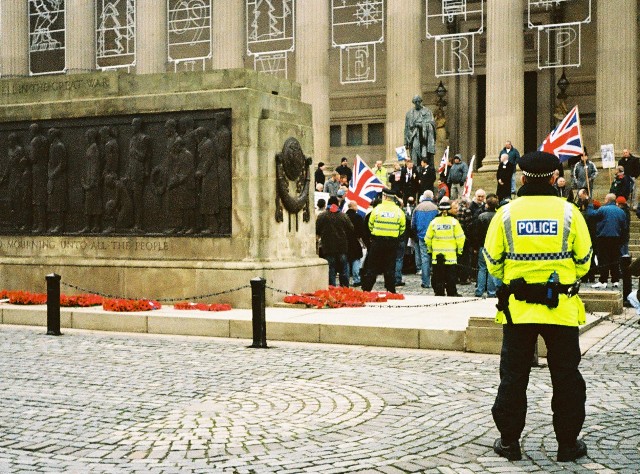 Insulting: the rally at the war memorial 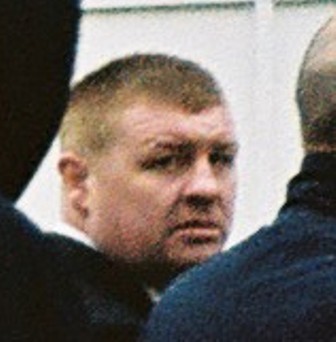 The morning began with an anti-fascist rally at the bottom of Bold Street. About an hour into the rally, Alex McFadden, the chair of MCARF (Merseyside Coalition Against Racism and Fascism) announced that the BNP had not turned up. Wherever he got his information from, it was totally incorrect. The rally had started to disperse, when word got round that about 100 BNP people were on Church Street.
More than twice that number of anti-fascists quickly mobilised on Church Street and started offering them some vocal opposition. The police formed a line between them and the fascists before the opposition could develop into anything more direct, and forced them further up the street. For the rest of the day, the BNP needed a heavy police escort everywhere they went. This kind of cramped their opportunity to hand out the race-hate pamphlet that twelve of them were arrested for last week. Apparently the Crown Prosecution Service has decided not to prosecute them, though it hasn't publicly given a reason why. (There isn't necessarily anything sinister in this, it might be as simple as, they aren't sure enough of getting a conviction on the basis of the pamphlet alone.)
The BNP then walked through the city centre, still under heavy police escort, to hold their insulting rally at the war memorial. A few people stopped, and heckled them: "Nazi scum" and "Sieg heil", nothing that would offend your average person's sensibilities. But the police surrounded them and threatened to arrest them. Free speech for some but not for others, eh?
The police escorted the neo-nazis to Moorfields station, from where they left town. The police seemed particularly friendly with one character in particular, a stocky, red-haired fellow called "Pete", who seems to be the BNP's local organiser. He was seen giving orders to the twelve who got arrested last week.
If the BNP is trying to present itself as a respectable political party these days, not all of its members can keep up the facade. One of them barged into News From Nowhere bookshop that day and threatened to burn it down for promoting "communist subversion." He seemed not to approve of the shop's range of books, which includes black history, feminism, gay rights, socialism, anarchism, and the history and culture of countries around the world. This was a typical piece of neo-nazi hypocrisy. They bleat about their own right to freedom of speech, but they will trample on everybody else's.