More than 150 people came to Next To Nowhere's Free Shop on Saturday. This was a one-off event to mark Buy Nothing Day. The organisers encouraged people to come in by offering free tea and toast and free mistletoe on the street outside. 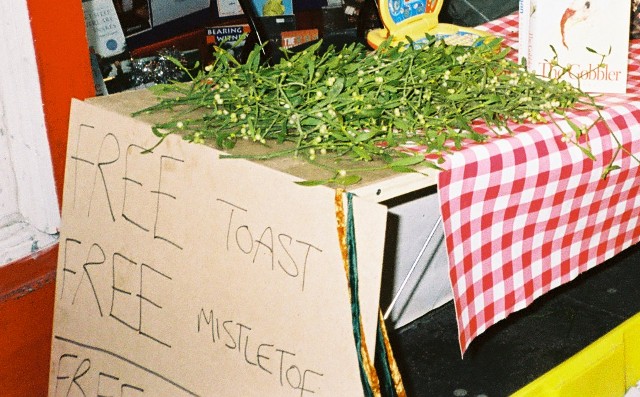 Buy Nothing Day originated in the USA in 1992. It was intended to make a statement about over-consumption and the amount of waste this generates, and encourage people to re-think their lifestyles. It generated some controversy, and still does, if the comments to the previous posting about Buy Nothing Day are anything to go by! Some people think consumption by itself is not the issue, others think the event is patronising to people who can't afford to buy much anyway.

But none of the people who wandered into the free shop last Saturday seemed to feel patronised. Some, who had come to town to do Christmas shopping, looked in out of curiosity, and found they preferred doing some "non-shopping", and getting some refreshments at the free cafe. People with little money were happy to take away free items they needed, and for the people who had donated things, it was satisfying to see goods they don't need any more being taken for re-use. Not everybody who came had heard of Buy Nothing Day, and had to be reassured that everything really was free!

Whatever the general criticisms, this particular free shop worked as a co-operative event, it introduced people to the social centre who had never been there before, and it gave people a taste of how liberating it is to do without currency for once.