A crowd of two hundred or more Wirral residents gathered at Wallasey Town Hall last night, to show their anger at the council's planned cuts to vital services. 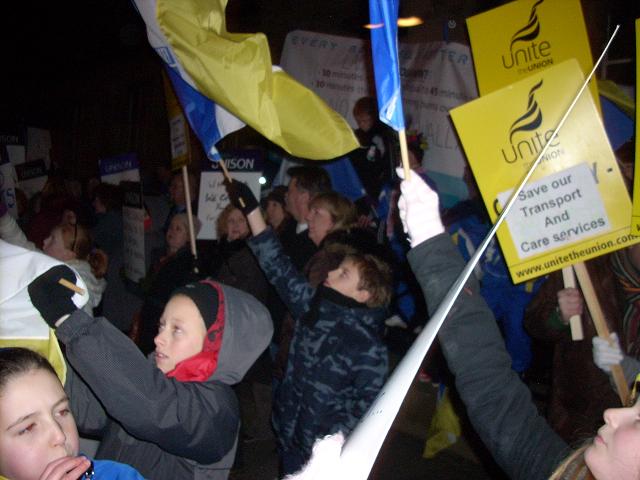 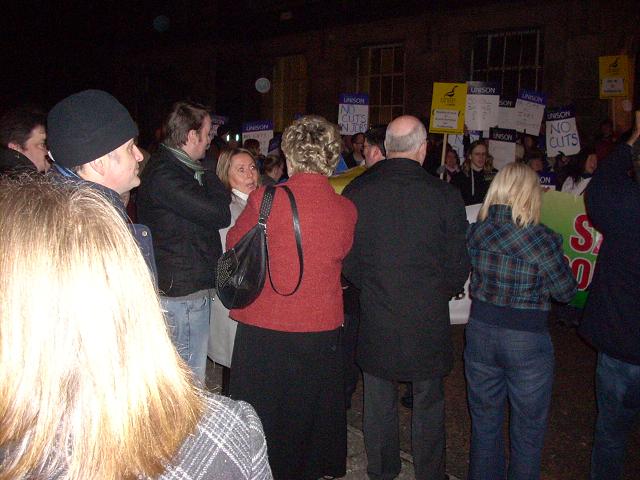 Local Tories (middle of photo): not to be trusted! 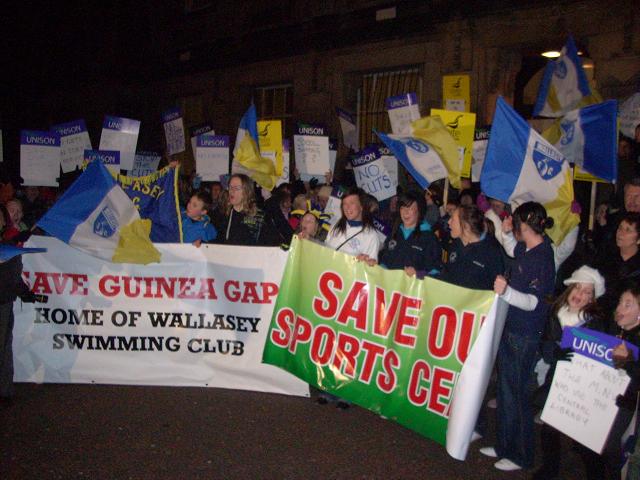 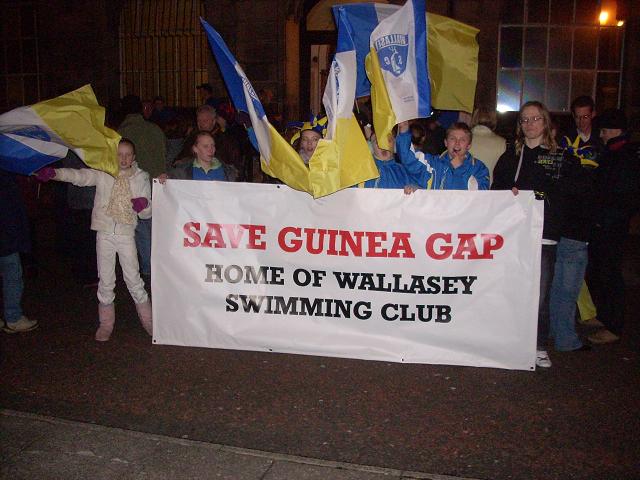 The Labour/Lib Dem coalition have been pushing a 'Strategic Asset Review', which Council leader Steve Foulkes claims will 'support regeneration'. However - as many Liverpool people know - the word 'regeneration' is code for putting the needs of business before those of working class people.

The coalition plans the closure of twelve libraries - Birkenhead Central Library and many local branches - plus two leisure centres (including Guinea Gap Baths, right next to the Town Hall), Pacific Road Theatre and the Wirral Museum at Birkenhead Town Hall. As a replacement, the Cabinet want to build eleven new buildings, at the cost of £20 million. They claim this will mean "better but fewer" facilities. However, Foulkes (who got a 500% pay rise this February) has admitted he is looking for ways to save money. Libraries, cultural venues and recreation centres are clearly not considered a worthwhile investment.

The protest was arranged when Conservative Councillor John Hale, Chair of the Culture, Tourism and Leisure Overview and Scrutiny Committee called a special meeting to examine the Cabinet's proposals. Though the Committee has no powers to overturn the proposals, the Conservatives are seeking to use the dispute as a wedge issue in the run-up to the local elections next May.

At present, the Tories are the largest single party, having made significant gains from Labour this year. However, a coalition between Labour and the Liberal Democrats has kept them out of power. They would need a swing of a further nine seats to win overall control, but local leader Jeff Green and his councillors are keen to make political capital by opposing the hated cuts.

It is measure of these crisis-ridden times that the Labour/Lib Dem proposals are so right wing that the Conservatives - many of whom reached political maturity during the reign of Margaret Thatcher - are to be able to position themselves to their left. However, should they win power, the Tories would face similar - or maybe even deeper - economic problems, and would have to find money from somewhere, either by service cuts or higher taxes.

Yesterday's protest included many workers from the various facilities, as well as young children on perhaps their first demonstration. If the campaign is to be successful, it must ignore the siren songs of both the Tories and the Labour Party - which many trade union bureaucrats are linked to - and focus on concerted workplace-based action, which would have huge backing from Wirral people.