The Rage in Greece

May the Anger of the Unemployed and Students be Tranformed into Combativeness for the Resumption of the Class Struggle of the Proletariat ! 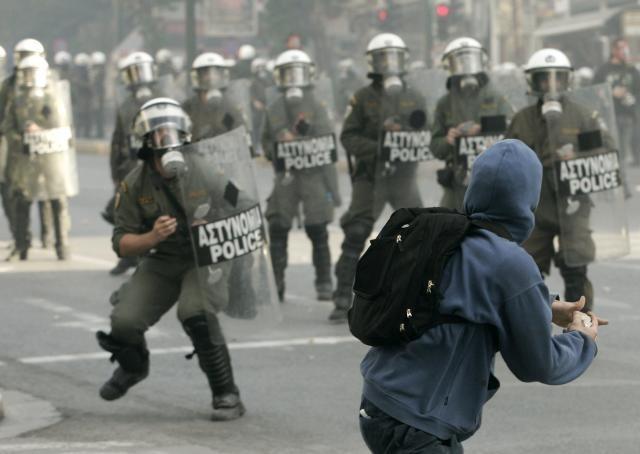 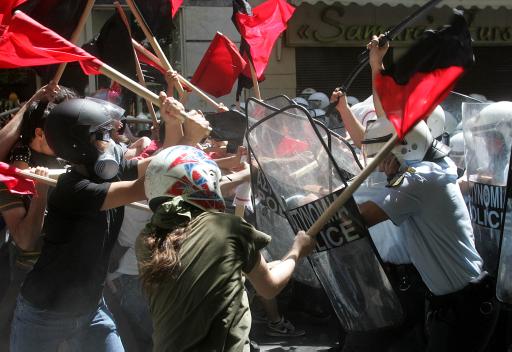 This is the cry which rings out in the protests of students and the unemployed in Athens, Salonika, Patras, Corfu and in many other cities of democratic and republican Greece.

On Saturday December 6, in the Exarchia district of Athens close to the Polytechnical school, Alexis Grigoropulos, a fifteen year old youth (from a well-off family), was struck down by a bullet fired in cold blood by a cop on patrol in this district known for its spots frequented by young people, artists and intellectuals, and as a multi-ethnic stronghold of the so-called far left.This is the spark which detonated a long pent-up anger which has put Greece under pressure for several days .

The social situation has long been unstable; unemployment increases from one month to the next, for the youth, in Greece as throughout Europe, the prospect becomes more and more precarious and the uncertainty of life complete. After having given the illusion, during the time of expansion, of being able to guarantee a future of prosperity and well-being to the younger generation, capitalism has shattered all expectations: the economic crisis which led the banks to close the purse-strings overnight, was added to a generalized corruption among those in control and to a budget which promises only sacrifices.

At all times the police have used the most expeditious and brutal methods towards the “young rebels”, within the context of a blind and contemptuous policy of a dominant bourgeois class which has persuaded itself that it can control the pockets of rebellion and ensure the support of public opinion thanks to “zero tolerance”with respect to those who are called in turn “insurrectionary anarchists”, “the black block”, “misfits”, “squatters”, “rabid”, “vandals”, and so on.

The social unrest which the capitalist crisis causes especially among the proletarian class and including petit-bourgeois youth also hit by economic difficulties and fearing a difficult future, is without any doubt the cause of an anger which is ready to explode on any occasion, with more or less of violence according to the quantity of accumulated explosive matter. The Greek government has to seek to extinguish the raging fire of the last several days in one way or another, perhaps by sending the police officers “culpable” in the murder of the young Alexis to justice. And it will inevitably find indirect support in the leftist or so-called far left parties always ready to whine about “democracy denied”, the “infringements of human rights”, to speak about a climate comparable with that of “the dictatorship of the colonels” in the name of a true democracy, including the problems of young people and attentive to the future of new generations.

But it is under democracy that the workers are exploited to death and that youths are murdered by the cops!

Anger, and the combativeness of the young unemployed and students can only find an orientation and a solid objective for which it is worth the hardships of fighting back, than in the class struggle, the struggle of the proletariat because it is the only social force which can ensure the future: the proletariat is the only class which in periods of expansion as in times of crisis, has no interest in the preservation of capitalist society; a society where all the wealth produced is monopolized by a small bourgeois minority, while the proletarian majority of the population which is exploited by capitalism to produce this wealth, is condemned to fall periodically into misery and starvation, when it is not thrust into the horrors of war.


– For the Resumption of the Proletarian Class Struggle!

– For the Unity of Employed and Unemployed Workers, Young and Old, Immigrants and Natives, in the Struggle for the Intransigent and Exclusive Defense of the Living and Working Conditions of the Proletariat !

– May the Murder of a Youth by the Cops Not be Added to the Hundreds of Deaths at Work Caused by Capitalist Greed Without a Response !

– May the Revolt Not Only be the–More than Justified–Demonstration of Anger and Social Tension, But Become a First Step Towards the Resumption of the Proletarian Struggle Organized Against All Bourgeois Interests, Both Now and in the Future!

to see a communist party trying to jump on the wagon of an anarchist mobilisation! Something must have changed over the last weeks, for sure.
Solidarity with the greek people and our anarchist comrades!
Remember Carlo Giulianni and Nicolas Neira.

the 1st comment makes no sense, this is not "an anarchist mobilisation" its a popular mobilisation, dont try taking over the anger of the people... its very clear that its no group that is controlling things (communist or anarchist), there are about 400 organized anarchists in athens, and we have seen demonstrations of 10.000, the same with all the other towns, like Patras were there are 100 anarchists and we saw a demo of 5.000
the popular assemblys putted together are not only controlled by organized anarchists also, everyone is free to join, discuss and propose not only anarchist solutions

Do you hear youself sometimes?

"May the Anger of the Unemployed and Students be Tranformed into Combativeness for the Resumption of the Class Struggle of the Proletariat !"

Capitalism fucks everyone over in the end, not just your idealised 'working class' that never existed in the first place. This is what folks in Greece have realised. Hence the Universities and students are rioting, and the unions are striking in solidarity.

The strike was planned before this all started, it wasn't a solidarity strike.

The working class doesn't exist? Are you stupid?

@+K$ there is no working class?? where the fuck do you live?? the working class is everyone that works for others... no matter if your a student, a factory worker, a peasant or a fucking office worker, if you sell your working capital in exchange for a money gratification then you are the working class

This is a popular revolt, that's for sure, but no one can ignore the massive imprtance of the Greek anarchist movement in it. I am sorry to tell you that there are much more than 100 or 400 anarchists in the two cities youhave mentioned. Anarchism in Greece might not be a massive movement in numbers but it is important and of course pretty much numerous than what you say.

Another thing. Every single sociologists and social worker will wish to present this revolt as the result of despare and lack of economical prospects. A mere reaction where there is no place for people's will power, determination, intention, intelligence or creativity. Just the logical result of a few historical laws... that's all.

However sabotages, direct action, street fightning, and agitation of every kind have been happening in Greece for over 20 years, even in periods of its history that could be deemed as normal, or even slightly opulent. Without any apparent reason for rebellion. Besides, Greece may not be a really wealthy country, but neither it is as poor as many would like to present it in order to adapt the reality to their theory rather than the other way round.

The anarchist Greek movement and the popular revolt it has partly (but very importantly) instigated is the product of historical/economical (call it what you will) conditions, true, but to a certain point. It is also the result of a determination and insistence in the struggle by many people who at some point could have also given up and done the same as their homonimous "proletarians" in more (and even in less) economically developped countries. Proletarians feed like pigs and unfit for fight or sometimes poor as hell but confused and more busy in killing each other than in organising any revolution. Perhaps one does not choose to be a proletarian, but for sure that become a revolutionary relies ultimatelly on a personal decission. Only you can decide that and pick your side.

However these Greek rebels, anarchists or not (although with an undenyable anti-authoritarian vocation in their vast majority) remained constant in their battle, sometimes perhaps for pure necessity, but also for psychological factors such as simple love for the cause and the posibility of a different world without classes and hierarchies.

I know you may come out with something like "another bloody idealist with his hocus pocus"... well, I don't give a damm. I acknowledge all the contributions that Marx gave to the revolutionary struggle but I think that it is not he same talking about "conditioning" than about "determinism". The latter simply, cannot explain everything even if it is through the Marxist theory.

What I meant to elborate is that there isnt, wasnt, and never shall be a 'proletariat' in its *idealised form*. To pretend this is an absurd notion. This doesnt mean that there isn't a 'working class' it just means that marxist assumption of a blameless proletariat that is singularly exploited is a myth.

It seems like what you are saying is that there is no class consciousness amongst the working class. I don't agree with that one bit. You look at the UK and you will find very few remains of this. However there are places (which authorities are trying their best to do to them what they did to the UK) where there is a strong proletariat and they take to the streets on a very regular basis. Greece alone stages thousands of strikes and protests yearly ranging from work grievances to police brutality, to the protection of free spaces (squats parks forests etc) These protests will usually gather a significant crowd. Granted the proletariat is not as strong and conscious as we'd like for it to be (if that were the case the world would be a very different place right now) however to reject the existance of the proletariat and class consciousness outright only demonstrates that you have very selective knowledge on the matter,

I am writing this to you as a Anarchist in Greece who has spent a fair bit of time in the UK, and has participated actively in 'social activities' both here and in the UK.