On Saturday evening January 3, after one week of air raids which left more than 450 dead and more than 2000 wounded, the Israeli army began its land offensive into Gaza. Its military officials declare that the operation will be “long”. The odious Israeli propaganda, broadcast by the majority of the international media, presents this bloody attack as a “response” to the salvos of the “terrorists”of Hamas in power in Gaza. 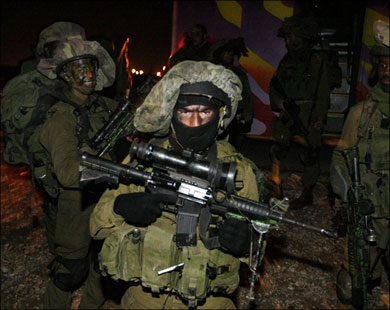 It “forgets” to mention that for nineteen months Israel has imposed a blockade (which has been total for a year) on the million and-a-half inhabitants of Gaza, which has plunged most of the population into misery (some profiteers enrich themselves by smuggling, while 80% of the population has sunk below the poverty line), causing massive unemployment (nearly 65% of the active population) and hunger (60% of the children are malnourished).
When it was Hamas, and not more collaborationist currents as they had wished, who won the elections in Gaza in January 2006, the democratic governments of Israel and America declared that they were going “to strangle” this government; the democratic European governments lent their support by withdrawing all “humanitarian aid” to Gaza (except that earmarked to pay the police!), and the slightly less democratic Arab governments of the area followed. This political military and economic pressure continued until the imposition of the blockade of the territory with the aid of Egypt (which controls one of the exit points from Gaza), when the partisans of Fatah (armed by Israel) were militarily beaten by those of Hamas.
Reactionary, religious and anti-worker, the Hamas party won the elections because of the anger of the population against the waste, corruption and naked pursuit of self-enrichment by the leaders of Fatah; it also presents itself as an irreconcilable adversary to Israeli domination. However, since its election, it proferred numerous gestures of openness in Israel's direction. But for the Israeli government as for its imperialist godfathers, that was not at all sufficient: what they desire in Gaza is authorities entirely under their boot, obedient slave-drivers who only concern themselves with controlling the population as is the case of the “Palestinian Authority” of Mamoud Abbas in the West Bank! “Democracy” must serve the interests of the colonialist and the imperialists, if not it is worthless...Israel broke the truce discreetly negotiated with the “terrorists” of Hamas in June, by killing 14 Palestinians in Gaza in November and 8 others in December (4 Palestinian had already been killed by the Israeli army in the West Bank in October): the inevitable response of Hamas, with the launching of its crudely-made rockets, gave the pretext necessary for the attacks. According to the Israeli press (cf Haaretz, 31/12/08), this military operation actually commenced preparations 6 months ago, at the same time as the negotiations for the truce, the Israeli army needing sufficient time to collect intelligence information on the positions of Hamas and the “militant groups”existing in Gaza!