As Liverpool hands the Capital of Culture baton over to Vilnius and Linz, the city’s economy is in for an extremely tough year. Top council leaders claim Liverpool is in particularly good shape to ride out the global economic collapse, but statistics and analysis show they could not be further from the truth. 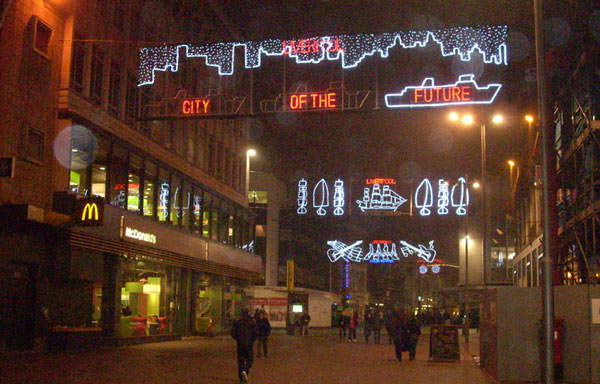 The Crisis Of Capital

Before we look at local conditions, it is important to examine the worldwide trauma which is starting to affect Liverpool. People in the mainstream media have a way of making economics seem more complicated than it actually is, so here is the problem, as simply as I can put it.

A manufacturing business makes a profit when it is able to sell things made by its employees. This profit is effectively taken from those employees, because their wages are far less than the value they added to the thing (how much less depends on local conditions). However, if the thing cannot be sold, there will be no profit, and so the business stops producing things, throwing its employees out of work.

During the 1970s, countries such as China, India and Bangladesh were brought into manufacturing. Factories started closing in the ‘developed world’, including the United States and Britain, because businesses wanted to make larger profits in the ‘developing’ countries, where they would be able to pay workers much lower wages. In the late 1980s and early 1990s, the manufacturing workforce was boosted by the collapse of Communist Party dictatorships in eastern Europe.

As a result of this, the basis of the economy in ‘developed’ nations began to change, and we entered what is sometimes called a ‘post-industrial’ society. As manufacturing jobs all-but vanished, they were often replaced by work to do with consumerism - the distribution and selling of things, rather than the making of things.

These jobs tended to be lower paid, but the workers in such employment still needed to be able to buy things, or business would not be able to make a profit. As the value of wages stayed level or fell in relation to what they could buy, the credit industry grew massively. If you couldn’t afford to buy that widescreen plasma television right that minute, there were many companies competing with each other to lend you the money.

Because of this competition, credit companies had to always be seeking new markets, investing in riskier and riskier loans. The ‘credit crunch’ started in July 2007, when it became clear that people with ‘sub-prime’ mortgages in the US - i.e. people who could not afford a mortgage, but had been sold one anyway - were no longer making their payments.

This meant people began losing their homes, and mortgage companies had to write off their ‘toxic assets’ - money they were never going to get back. But they in turn had been loaned money by banks, so now they couldn’t get paid back either.

It was soon obvious that much of the value businesses thought they owned was actually imaginary; they might as well have bought castles in the sky. The credit crisis then spread to the ‘real economy’ - the making of things. If banks were collapsing, they couldn’t lend money to manufacturers. If manufacturers couldn’t make things, they had to shut down production. Crucially for most workers in ‘post-industrial’ Britain, this means there is less to sell, and people unable to get loans like they used to are unable to buy. That’s one vicious circle.

As Paul Krugman, the winner of last year’s Nobel Prize for Economics has written:

“The fact is that recent economic numbers have been terrifying, not just in the United States but around the world. Manufacturing, in particular, is plunging everywhere. Banks aren't lending; businesses and consumers aren't spending. Let's not mince words: This looks an awful lot like the beginning of a second Great Depression.” (The New York Times, 5th January 2009)

For a long time, Liverpool’s economy was based on its handy location for transporting things across seas, things that had often been made in other Northern places - such as Manchester - but also in the industrial area near the docks. In fact, Liverpool grew to something like its current size due to the transatlantic slave trade.

According to research by Stuart Wilks-Heeg from the University of Liverpool, local employment has risen by 45,000 since 1997, as the city’s economy began its recovery from the loss of its old base, which saw 30% of jobs wiped out. However, in these ‘post-industrial’ times, this growth in Liverpool’s economy was largely based on three areas: tourism (especially trading on The Beatles’ name and Capital of Culture), consumerism, and state employment. All these areas are now under threat from the global crisis.

Well they would say that…

Despite all the gloomy predictions from economists, politicians remain upbeat, in public at least. On 5th December last year, Council leader Warren Bradley told the Daily Post that:

“In terms of legacy, the new Arena and Convention Centre could not have had a better first year, thanks to the profile from hosting major Capital of Culture events such as the opening weekend, MTV Awards, and Sports Personality of the Year.”

Bradley also expressed apparent delight at how the massive, privatised shopping complex of Liverpool One had opened:

“Similarly, Liverpool One has had a cracking six months and is attracting people from all over the region to the city - shoppers who had previously used Manchester or Chester.”

He then pulled his head out of the sand and stuck it in the clouds, arguing that:

“The downturn in the economy will play to our advantage, as people in this country may choose to go on more city breaks rather than holidaying abroad, particularly given the exchange rate.”

This is deluded thinking. Even if more people from this country were to go on city breaks rather than travel abroad - despite the fact that it is often cheaper to fly across the continent than drive or ride a train across the county - the same would apply to people from overseas, who make up a large proportion of tourists in Liverpool. Besides, in this age of international capital, it doesn’t particularly matter whether a shop’s customers make their purchases in London or Liverpool, chains are closing anyway. Already, the city centre Woolworths has closed, and Zavvi - which lies on the edge of the Liverpool One development - has gone into administration.

Bradley would much rather mislead people about the direction of the local economy than admit the truth: the city’s economy is about to sink like a stone.

All indicators point to a huge rise in unemployment, as retail outlets close, and this will have a knock-on effect on other sectors. Tourism will also plummet, from its artificial Capital of Culture high to something much, much lower. That government spending is also in danger, as the state prepares for cuts in the years ahead. Local council tax receipts will fall, leading to some combination of higher taxes and cuts to council services.

The people employed in retail and service are mostly young, and non-unionised. They are very likely to be burdened with high levels of debt - both student loans and credit card bills. The people in state employment are far more likely to be unionised, although that will count for little, as union bureaucrats collaborate with the government and try to manage their members’ anger.

Mix all these factors together and you get a potentially explosive combination.

In a world that has never been more closely connected, what happens in Liverpool will depend to a large extent on what happens elsewhere, perhaps most crucially the countries where manufacturing is a major source of employment. But we can say this for certain: 2009 will be a year of great struggle.