As hundreds of thousands in London, Edinburgh and around the world demonstrated against Israel's genocidal attacks on Gaza, a much smaller protest took place in Wallasey, Merseyside. While it would be inappropriate to draw many parallels between the two, it can be said the struggle for life and freedom in Palestine and for decent public services in this country have one thing in common: they represent squares in the global chess match between the profit system and the rest of humanity. 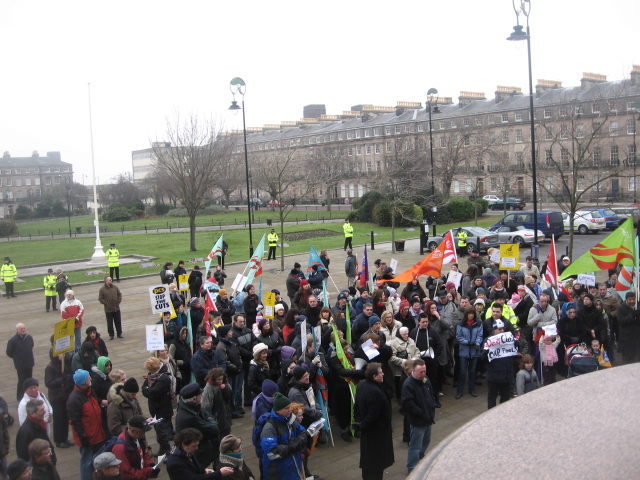 Fate prevented there being a high turnout: apart from the fact of the Palestine demo, it was a bitterly cold Saturday morning, and publicity had been in very short supply. Despite all this, about two hundred people braved the conditions, and marched the two miles from Wallasey Town Hall to the threatened Wirral Museum in Birkenhead.

The event was a slightly odd one, and proved the old saying that 'politics makes for strange bedfellows'. Anarchists marched behind Conservatives, who clapped a Socialist Workers Party speaker (prospective Wallasey and Moreton Tory MP Leah Fraser even briefly held a Unite placard, before presumably thinking better of it). Workers who jobs are faced with the axe were present, along with trade unionists and people from smaller socialist parties. Quite a few children also marched.

At the Birkenhead rally, several speeches were made, and everyone condemned Wirral Council's plan to close twelve libraries - Birkenhead Central Library and many local branches - plus two leisure centres (including Guinea Gap Baths, right next to the Town Hall), Pacific Road Theatre and the Wirral Museum at Birkenhead Town Hall. Labour Council leader Steve Foulkes has pledged "better but fewer" services, and has the support of Lib Dems within his coalition.

During the last week, more than two thousand people have attended the Council's sham 'consultation' meetings, and have overwhelmingly shown their hostility to the cuts. The 'Save Wirral's Services' Facebook group has over three thousand members. Many letters have been written to local papers. In the end however, the decision rests with the Wirral Cabinet, when they meet on Thursday, 15th January.

Nationally, the Conservative Party openly wants to "shrink" the public sector, yet for now the local Tories continue to speak left of Wirral Labour and Lib Dems over the proposed cuts. For their part, the trade union leaders did not propose any industrial action yesterday.

Politics only makes for strange bedfellows so long as each person thinks it's in their interests to snuggle up. After the official political process runs its course, we'll see who's in a committed relationship with who.

For videos of the event, visit: