Justice for the Shrewsbury 24 building workers!

1972 was a year of successful industrial action in Britain. The miners had won over pay, the Tory Government had been forced to release five imprisoned dockers. 1972 also saw Britain's first National Building Workers' strike. The strike committees of North Wales building workers would go on to be the victims of one of the worst miscarriages of justice since the days of the Tolpuddle Martyrs. They would be vilified and hounded by parts of the press, convicted by a court as a deterrent to strikers, and abandoned by their own union leaders and the TUC. Six of them would go to prison and one of these would die later as a result of the treatment he received while there. See

37 years later, an Early Day Motion (EDM) has been tabled demanding a public inquiry into the gross miscarriages of justice and disclosure of all Government and security papers relating to the case. 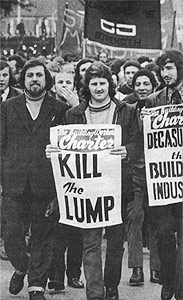 That this House notes the campaign seeking justice for the Shrewsbury 24 building workers who were convicted in 1973 of charges arising from the 1972 National Building Workers' strike; recognises that UCATT, Unite and the Trades Union Congress officially support the campaign to show these convictions were politically motivated; calls for a public inquiry into the gross miscarriage of justice that resulted in the imprisonment of pickets; and believes that such an inquiry should seek the release of all Government, police and security service papers relating to the case, study apparent links between UK building employers, the Tory government and the Home Secretary at that time and investigate the intimidation and abuse suffered in prison by Ricky Tomlinson and Des Warren.

Consider asking your MP to Support this Early Day Motion

You can write to at

Or by post at : House of Commons, London, SW1A 0AA