Co-ordinating solidarity and exchanging information on independent, rank and file working class resistance to the profit system. The revolution will be social networked... We support... rank and file workers' struggles against the chaotic profit system! We believe... workers know how to run our workplaces far better than business people, the government, or trade union leaders! We aim for... workers' control over our own jobs and our own lives! 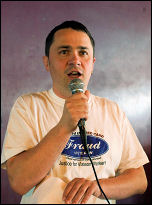 Over half of UK workers have seen an attack on their jobs, pay or working conditions since the start of the recession, according to bosses’ website Keep Britain Working. LibCom reports that:

But some groups of workers are fighting back, showing that there is an alternative to the kind of despair that the BNP and politicians generally feed on: working class solidarity!

A solid strike by London Tube workers aside, the good news this week is that the decisive action of Ford/Linamar workers in Swansea has forced bosses into a retreat, and saved the job of their union convenor, Rob Williams. ‘Red Robbo’ was sacked when he expressed solidarity with the sacked Visteon workers, who were taking direct action in and around their Ford-linked factories (the Visteon fighters eventually won a much improved redundancy package). An indefinite strike had been due to start at Linamar on Thursday, but the company agreed to unconditionally reinstate Williams, averting the action with just hours to spare. It may not be a mere coincidence that Williams had recently visited the Ford plant in Kansas, which is the main receiver of parts from Linamar Swansea. But this will not be the end of the war; Linamar will still be looking to offload the cost of their profit crisis onto the workers who create that profit. Watch this space, and this one.

As if Ford weren’t having enough trouble, there’s also the beginning of resistance at their Getrag plant in Halewood, Merseyside. Getrag want to impose a cut to one of three shifts at the gearbox-making factory. Last year, production was halted for a month over Christmas, and in January workers returned to a four day week. Now bosses want further reductions, and Unite union negotiator Dave Osbourne seemed willing to comply two weeks ago, telling the Liverpool Daily Post that:

“We met senior Getrag management, who indicated to us their need to reduce shift work in the plant as a result of falling volumes. They have given notice they intend to move to two-shift working in mid-June or the end of June. We do not foresee any job losses.”

This statement exposes the nationalist perspective of the union tops. They are trying to protect their dues base by forcing concessions on workers, and hoping that employers will keep jobs in the UK. However, this week it emerged that Getrag want to move the shift to a site in Bordeaux, France, where workers will presumably face a higher rate of exploitation. Six hundred and fifty Halewood workers reacted with fury, and staged a ‘wildcat’ strike - walking off the job without going through time-consuming official procedures. Osbourne has now pledged to get the matter “satisfactorily resolved”, but his own bottom line is sure to be his primary concern.

Finally for this week, workers at a sweatshop in Mexico were held hostage by their employer last Friday, in an attempt to stop them striking for better working conditions, a cafeteria, health services and better pay. Managers and security guards at the Midland factory Ciudad Juárez prevented a walkout by forcibly holding some sixty technical and blue-collar workers, who produce machine equipment for the oil industry.