Co-ordinating solidarity and exchanging information on independent, rank and file working class resistance to the profit system. The revolution will be social networked...

We support... rank and file workers' struggles against the chaotic profit system!

We believe... workers know how to run our workplaces far better than business people, the government, or trade union leaders!

We aim for... workers' control over our own jobs and our own lives! 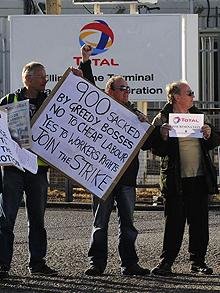 Following the recent gains made by workers’ resistance at Visteon and Linamar plants, there is apparently more positive news this week. Wildcat strikers at the Lindsey oil refinery – in conjunction with others in solidarity around the country – have seemingly won the reinstatement of seven hundred sacked construction workers.

The dispute was triggered when fifty-one steel erectors, platers and welders involved in the construction of a £200 million desulphurisation plant were sacked by Total sub-contractor Shaw Group UK. 1,200 workers at the site then took immediate – and illegal – strike action, demanding a reversal of the redundancies. Some of the fifty-one had been on the strike committee when Lindsey workers struck back in February, and Total clearly intended to show that dissent would not be tolerated. Indeed, they responded to these latest wildcats by sacking a further six hundred and fifty constructors last week.

However, Total and their sub-contractors had obviously not counted on the determination of the workforce, and those in a similar situation countrywide. Around 2,500 workers at thirty sites have been involved in wildcats, and this has clearly stunned Total, because they have now agreed to go back on their decision.

The gains made by the united Total workforce have been made by acting outside of the law, and rejecting the official procedures laid down by trade union tops. But the matter is far from over. Total will be keen to avenge this defeat and make the most of the opportunity the unemployment crisis gives them to further drive down wages and conditions. A ballot over formal strike action is just a few weeks away, but that still gives Total time to prepare a response. Join the ‘Victory to the workers at Lindsey Oil Refinery’ group here.

As previously reported in Update 5, parents have been occupying the roof Lewisham Bridge Primary School since the end of April, in protest against the demolition of the school, and its replacement with a privatised ‘foundation school’. An eviction attempt was made on Thursday, but this was successfully repelled by the occupiers. The ‘Hands Off Lewisham Bridge Primary School’ group reports:

“At 9.30am 4 police vans pulled into Elmira Street including a TSG (Territorial Support Group) van… We secured the gate and drew up the ladder much to the concern of the few journalists who were now stuck on the roof with us… As the police formed their line around the school the bailiffs arrived. The journalists were finally let out by the security inside the school to the hysterical screams from Lewisham’s press officer that they would all be arrested for trespass… There then followed a 2-hour standoff. We kept up our chants and even sang songs courtesy of Goldsmiths students’ musical accompaniment…Finally the cops realized that they couldn’t physically remove us from the roof and they left, followed swiftly by the bailiffs."

Pictures and a video of the confrontation can be seen here.

In an illustration of the lengths the state will go to when profits are threatened by labour resistance, police have stormed an occupied car factory in Pyeongtaek, South Korea, reportedly causing eighty injuries. 2,600 out of 7,100 workers had been sacked by SsangYong Motors, so more than one thousand have been occupying the plant for over a month. On Thursday, they rejected a “final offer” from SsangYong, and on Friday the police were sent in to protect strikebreakers and end the occupation, illustrating the hand in glove relationship between corporate and political power.

The Liverpool Workers’ Fightback group will be meeting at Next To Nowhere social centre, 96 Bold Street, on Tuesday 7th July, from 6pm. Solidarity with local resistance will be on the agenda, and all who are interested in supporting rank-and-file workers in struggle are welcome.