This past week has been relatively quiet on the industrial front. However, this is only in comparison to the past several, have seen workers gain real if unstable victories at the Lindsey oil refinery in North Lincolnshire, the Linamar car parts factory in Swansea, and a link-up between students and cleaners at the London School Of African and Oriental Studies. 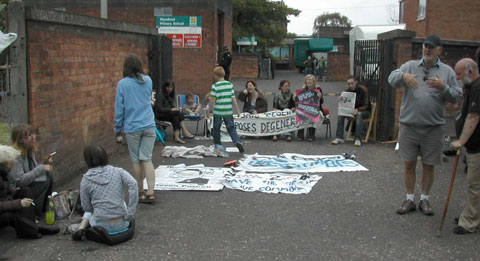 So with other disputes simmering, the 'only' direct action explosion this week has been the re-occupation of Wyndford Primary School in the Maryhill area of Glasgow. The city council's Labour administration closed twenty-two primary schools and nurseries this year, with many more closures planned. Inevitably, this results in very difficult school runs for parents, as Colette James explained to the WSWS.

"I’m a single parent with three kids. One’s just moved to nursery school, one to primary. They both start at 9 o’clock. Now, the primary school is just a stone’s throw away from the nursery. But how am I supposed to get to two places at the one time if the primary school is mile and half away?"

An earlier occupation of the site (along with nearby St Gregory's, which is also slated for closure) took place over the Easter holidays, but the Council refused to be moved, despite 95% parents opposing the plans during a sham 'consultation'. Last Friday, 26th June, was to have been the last day at Wyndford, but according to the Anarchist Federation, "Amid tears and distraught goodbyes, parents in one of the targeted schools slipped past security and chained the doors shut behind them."

Occupiers won an early victory, by preventing a council van from taking equipment away on Saturday morning. Again, AFed reports:

"On Saturday the Council vans arrived at 7am and began emptying the school of its furniture and equipment, catching the occupiers offguard who looked on with dismay as it seemed the Council would achieve its aim of the school closure being a fait accompli.

The occupiers sent out urgent messages requesting support and quickly a crowd gathered at the front gate. Suddenly the tables had turned, and it was the occupiers who were in control! As council officials looked on impotently, the campaigners refused to let the vans leave the front gates until all the furniture and equipment was returned to its rightful place, back inside the school!"

Extraordinary footage of this event can be seen here.

The Council have now cut off the water supply in the school, but many litres have now been donated by the local community! Money donations are urgently needed, and the campaign bank account is : "Save Our Schools”. Sort code 30-25-83 Account number 0558506

Those within travelling distance are invited to pay a visit, and bring food, a laptop, inflatable beds, sheets, poster paint, PVA glue and paint brushes to make banners, cable ties, disposable cups, games for the kids, and themselves if they wish to volunteer. The occupation's Facebook group is here, and the wider 'Save Our Schools Glasgow' group can be found at this location.

In Update 2, I drew attention to the struggles of textile workers in Bangladesh (check your clothes labels; this a huge industry). In response to reduced orders (caused by the global economic crisis) and cutbacks coupled with unpaid wages, worker militancy has increased dramatically in the Ashulia region, and provoked a fierce response by the state.

Last week, two garment workers were killed by police, and this Monday saw immense pitched battles with cops, which saw the state forces completely overwhelmed. They then started burning fifty factories, in an apparent attempt to stop strikebreakers.

The Liverpool Workers’ Fightback group will be meeting at Next To Nowhere social centre, 96 Bold Street, on Tuesday 7th July, from 6pm. Solidarity with local resistance will be on the agenda, and all who are interested in supporting rank-and-file workers in struggle are welcome.

For all references, see