Anti-fur activists from across the North pay a visit to Cricket on Mathew St, Liverpool and meet a chilly reception 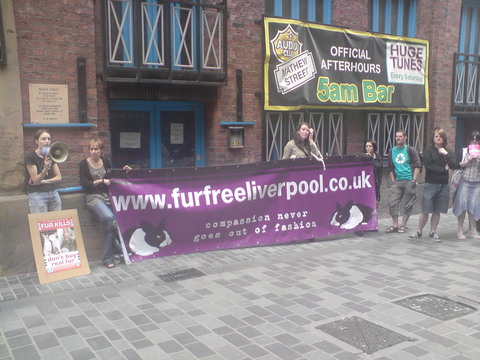 Merseyside Animal Rights took the opportunity of a Northern Animal Rights Coalition meeting in Liverpool on July 12th to relaunch the campaign against Cricket on Mathew St. With the support of visiting activists from Manchester, Sheffield, Leeds, Cumbria, Blackpool, Newton Le Willows & Boston, Massachusetts(!) a large and noisy demo was held outside the shop, which continues to sell real animal fur to overpaid celebrities with no taste, despite their pledges to the Liverpool Echo that they would not restock. A quick glance at their racks revealed 8 full-length fur coats currently in stock, in defiance of the campaign.

So it was definitely time to return to visit them after a long absence and the acquittal of an activist arrested on spurious charges at an earlier demo. Cricket were most definitely dismayed that this attempt at intimidation failed and to see us back, letting shoppers and tourists know about the blood on the shop’s hands. The police took longer to arrive than usual, the shop evidently having misplaced the piece of paper with Officer 8008’s direct phone number, thinking they wouldn’t need it again. Two cop cars blocked the street in time-honoured fashion, while the occupants failed in their attempt to limit our numbers and were stumped by their failure to locate a designated spokesman.

The great English weather failed to dampen the spirits of those assembled, who know the sun never shines on Mathew St in any weather (the permanent coldness possibly emanating from the dark heart of Cricket) and don't expect a warm reception from Justine Mills and her staff. We will be back (with scarves & gloves if necessary!) until they stop supporting the barbaric fur trade and join the 21st Century (although many of the fashions displayed in their window suggest a timewarp back to 1975).

Liverpool Uni's supplier for Graduation Gowns does fur too!

I graduated in July and one of the choices when choosing the gown dress from Ede's and Ravenscroft is for optional animal fur. This is pretty unacceptable nowadays considering Universities are supposed to be progressive institutions and Liverpool's now a fair trade one and will hopefully in the not too distant stop investing in the arms trade. Anyone up for a possible letter writing campaign to the University to stop using this gown supplier or something?