In Croxteth there is a decades old and well used path linking Altcross road to Oak Lane North, linking residential areas to Croxteth park, and enjoyed by walkers, cyclists, dog walkers and even a significant number of people flying birds in the woods. 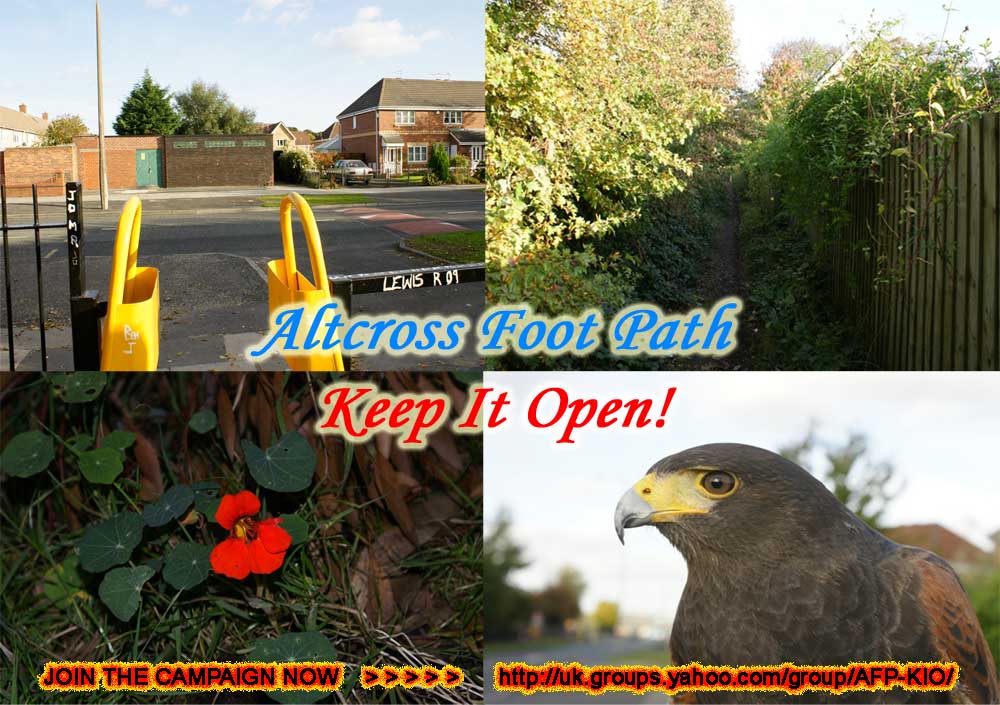 It is also a necessary linkway for working people travelling to work, greatly reducing their journey time and distance. However, in the past six years there has been a private estate built backing onto the path, and complaints made regarding damage to property and burglaries.

The council have passed a proposal to gate the pathway behind these addresses, thereby closing one end of the path. This despite written and verbal opposition, with a seven hundred name petition. Still this may be seen as fair enough if there were an alternative route on offer, but with no such satisfactory agreement, the council intends to push ahead with the closure and partial segregation of an area.

On 16th October 2009, the area was visited and found to be remarkably clean and well conditioned, and local people spoken to had for the most part no idea of the intended closure, and were overwhelmingly supportive of the pathway remaining open as users of the amenity. This included several residents of the new estate with properties adjacent to the vilified path.

The residents with gardens backing onto the pathway at either side would receive keys to these gates, though as the alley is too narrow for mass storage of bins, and the properties (as yet) do not have back gates onto the alley, this would seem redundant.

It becomes clear therefore that the path, following complaints by private residents new to the area, is to become free only to those who can afford it. While walkers, cyclists, dogwalkers, Falcon fliers, children playing, and the working class in general have either to like or lump a longer route, or accept their concrete confines.

If you are opposed to gating/closure take a look at our Yahoo Group and consider joining it.