“Until the lions have their own story-tellers, tales of the hunt shall always glorify the hunter.” - Nigerian proverb 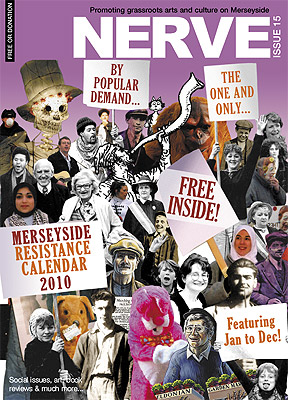 When we published our Merseyside Resistance Calendar in Nerve 11, we were overwhelmed by the positive response from people who had put it on their walls, been inspired to do some research, or had just found out something new about the city they had maybe lived in all their lives. In fact, lots of people wanted more, so this is what we’re giving you in Nerve 15.

Just like last time, the calendar is full of dates commemorating times when the ‘ordinary’ people of Liverpool stood up and took action for what they believed in. Because of struggles like these, great advances in living standards were often won from the rich and powerful, advances which have been attacked over recent decades, and particularly during this catastrophic economic crisis. The calendar features pictures old and new, and we’re confident they provide a thought-provoking collection which is a cut above the ‘business as usual’ calendars available elsewhere. And of course we’ve still got all the Nerve regulars, including artist profiles, book reviews and social issues opinion pieces.

History cannot be ‘neutral’ – it is the record of opposing forces battling it out, and the historian must either side with the oppressed or a section of the oppressors. At Nerve, we’re proud to stand with the ‘ordinary’ people who just happen to make the world - and Merseyside within it - go round.

Talking of history. We have reports that the New Museum of Liverpool Life will only have a small section devoted to the role played by workers in the making of the city. This museum started life as the Labour History Museum in 1986 with donations of artefacts from far and wide, reflecting our rich culture. It will be a shame if this is not recognised.

The full index is here. The free magazine will be available from cultural venues, libraries, cafés and News From Nowhere, Liverpool's radical and community bookshop.