2010 will be another dramatic year, with governments and bosses slashing their spending, provoking working class anger and resistance in the process. 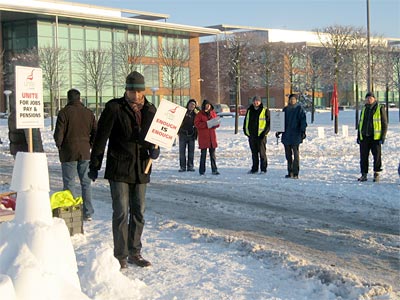 It looks like firefighters across the UK will be in the front line of resistance. With central government looking to make massive cuts, the 'independent' Audit Commission wants local fire authorities to reduce running costs by £200 million (

http://www.wsws.org/articles/2010/jan2010/fire-j04.shtml). This is on top of a £200 million in cuts between 2004 and 2008. Disputes are already bubbling under in Warwickshire, Lancashire, Essex and Cleveland, while Merseyside Fire Brigades Union members are currently on an overtime ban, in protest at Authority plans to axe 104 uniform posts, and 'save' £5 million.

In the summer of 2006, Merseyside firefighters protected frontline services from £3.5 million of proposed cuts (

http://www.indymedia.org.uk/en/regions/liverpool/2006/09/351022.html). They did this over a month of concerted strike action, which received high levels of public support despite a strong anti-firefighter campaign in the local media. Ultimately, the £3.5 million was still taken off the budget, but changes were made in areas less vital to public safety.

Three and a half years down the line, and the government wants to take away more essential resources. £200 million is a tiny amount when compared to the £850 billion bank bailout, but such cuts would harm the workers losing their jobs, and all the people who rely on their skills and professionalism. Ironically, the economic crisis has increased public need for this service, as people on low incomes are far more likely to experience fires, or suffer physically from their effects. The irrationality of the profit system is laid bare once again.

http://www.socialistworker.co.uk/art.php?id=19977), and setting up picket lines despite the freezing temperatures. They have good reason for such determination: the IT business is threatening 1,200 UK job losses, and want to close the final salary pension scheme, which Unite claims would amount to a 20% pay cut for those affected.

However, as with their equivalents in other unions, the Unite bureaucrats cannot be trusted to lead Fujitsu workers. On the contrary, they will try to protect their own interests by seeking a deal with the company, and then enforcing it as best they can.

On 11th January, Unite's national IT officer Peter Skyte claimed: "It appears that a disproportionate number of women, part-time and ethnic minority workers have been made redundant." (

At first glance, this seems like a leftish attempt to reach a 'fair' deal, but it is actually a de facto acceptance that redundancies are inevitable, and an attempt to restructure them. Part time workers often more likely to be female and non-white than their full time counterparts, Skyte is actually arguing for more full time redundancies instead, with the axe falling on traditionally more privileged white males, such as himself. But if Skyte gets his way, one major difference between him and the Fujitsu white males is that he will still have a well paid job, whereas they will be making their way to the local job centre.

On the other side of the world, companies have been using the Labor government's new 'Fair Work Australia' legislation to lock out staff attempting industrial action. The latest use of the Rudd administration's anti-worker laws came on the 8th and 9th of January, when Tabcorp’s Star City Casino locked out members of the Liquor, Hospitality and Miscellaneous Union (

http://www.wsws.org/articles/2010/jan2010/lock-j11.shtml). They took one hour stoppages in response to a row over deteriorating pay and conditions. The short walk-outs had been organised by the union leadership, but they are now offering no defence of their membership. Like all Australian union bureaucracies, they have already accepted the terms of the legislation, and will not mount a serious challenge when it is applied.