The BNP in Liverpool and Merseyside are only a small outfit, and will only have the resources to concentrate on a few key areas out of all the places where they are standing. But General Election rules mean that the fascists can co-opt taxpayer money and working class man power to spread their hate. 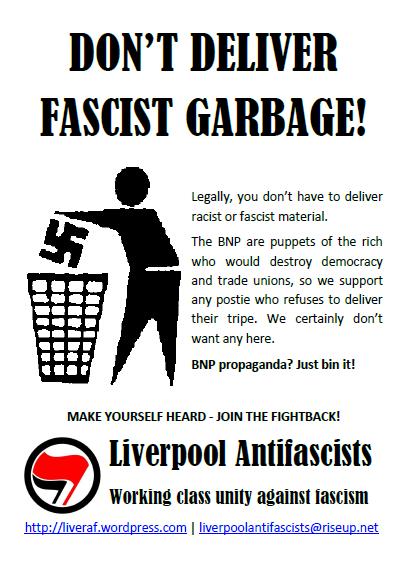 With Peter Stafford standing in Riverside, Steve McEllenborough in Wavertree, Charles Stewart in Bootle, and Steve Greenhalgh in Knowsley, they will get free postal delivery in those areas. Postal workers, already forced to deliver tons of wasteful, unsolicited junkmail, will have to add fascist propaganda to their workload.

As such, Liverpool Antifascists have released a new poster which we are encouraging people to stick up in their windows.

We heartily encourage everybody who is opposed to the virulent message of the BNP to stick this up in their window. We support each and every postal worker who heeds that message and bins the lies of the far-right.

Why should working people be forced to promote the message of a party which will act against them if elected? We shouldn't. The only place the worthless waste of paper that is a BNP leaflet belongs is the bin.

You can download a copy of our poster for your home here: