May Day was celebrated in fitting style over the weekend, as the festival organised by the Merseyside Mayday Collective attracted around five hundred to St Luke's ('bombed-out') church on Berry Street. 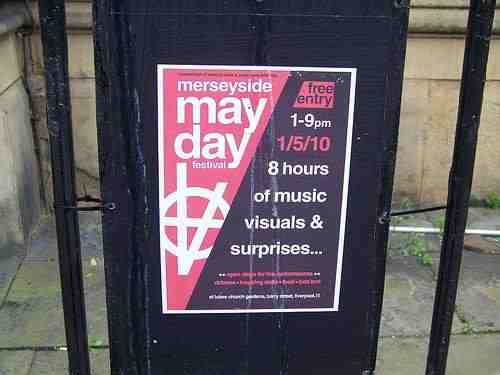 Preparations for the festival began a year ago, partly in response to the pitiful TUC event at Wallasey's Central Park. Writing at the time, /a>I commented that:

"Against the backdrop of a mounting crisis engulfing thousands on Merseyside and millions around the world, there was something almost tragicomic about the inadequacy of the event. [...] The steep prices are no doubt one part of the explanation for the extremely low turnout. Another is that hardly any publicity had gone out. But more importantly, this is symptomatic of an event organised by a bureaucracy that has significant resources, yet few surviving links with working class communities, and even less credibility within them."

With thoughts like these in mind, a group of grassroots class struggle activists set about trying to reclaim International Workers' Day - in direct opposition to the bureaucrats who had strangled all vitality out of previous celebrations.

The festivities began at 1 pm, as the stalls opened around the perimeter of the church. Each of the stalls was run by a volunteer from a grassroots organisation, from anarchists and communists to guerilla gardeners, and Nerve magazine to the feminist Angry Women Of Liverpool. Refreshments were provided by Food From Nowhere (who are based in the Next To Nowhere social centre), and later by dockers' pub The Casa. There was much good-humoured debate around the stalls, and an overwhelming sense that more can be achieved by combining forces in the months and years to come.

Inside the church itself, various musicians played to an audience who were enjoying the sunshine and unique atmosphere as well as the free music. A personal musical highlight was the performance by Liverpool Socialist Choir, who sang a capella versions of a South African trade union song, Italian anti-fascist anthem Bella Ciao, and clenched fist classics The Internationale and Bandiera Rossa.

This was followed by the Picketers' Platform, which saw speakers from the Industrial Workers of the World and the Solidarity Federation argue for workers' control over their own struggles, their own workplaces, and their own lives. Greg Dropkin from Liverpool Friends Of Palestine also asked the crowd not to vote for Parliamentary candidates who support the Israeli occupation of Palestine.

By all accounts, the 'official' TUC march was much better attended this year, perhaps due to the closeness of the election, the Liverpool location, and the effect of the new festival in town. However, after marching around the city centre, it heard appeals for votes from local Labour leader Joe Anderson, plus trade union bureaucrats 'Red' Len McCluskey and Emily Kelly. All three seek to maintain their privileged positions, whilst ultimately accepting the profit system and division of the world into rival states.

In stark contrast, the gathering at St Luke's was about working class people empowering themselves, and taking steps to improve their own lives. It was far from perfect, and serious attention will have to be given to the question of how we fund future May Days (even volunteer-run festivals on this scale cost a lot of money!), but as person after person told the tall, long-haired guy in the steward's jacket, it was a "wonderful event", and definitely a solid foundation to build on.