Greece: Blood and tears for the proletariat!

In order to resist the policy of blood and tears which the bourgeoisie inflicts on it, the proletariat has no other possibility than the resumption of the class struggle, starting with the rejection of anti-worker measures by the government and the calls for “national solidarity”, and for sacrifices “to defend the fatherland and democracy”. 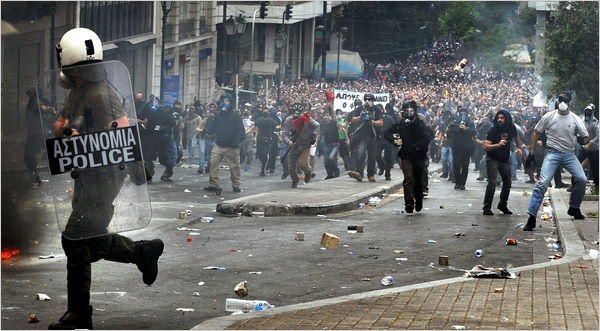 During the general strike in Athens


Throughout 2009 and early 2010 the Greek working class reacted to the worsening social situation (rising unemployment – 40% unemployment among youth in the north! – Deterioration of living and working conditions, increasing insecurity) waging determined struggles, even if they remained under the influence of the collaborationist unions and parties.

The largest unions, the GSEE for the private sector MEAP and ADEDY for the public sector, linked to PASOK (the Socialist Party currently in power) and the KKE (“Communist” Party) continued to play their role as social firefighters trying to isolate the most combative sectors and to amortize the tensions that inevitably accumulate by diverting them to “defense of the country” against the bankruptcy with a lot of nationalist propaganda and rhetoric about the illustrious history of ancient Greece!

The harsh austerity measures taken by the government of Athens following the edicts of the EU (especially Germany) and the IMF in exchange for the plan to avoid the bankruptcy of the Greek state were in the air for a long time, the Greek bourgeoisie has no choice: either it applies the series of anti-worker measures demanded by European and American bankers, and accept the high interest rates with which it will have to borrow for three years or it will be brutally marginalized and isolated from commerce on the international level.

Has anyone ever seen a bourgeoisie spontaneously choose its own ruin? But have you ever seen one bourgeoisie yield to the demands of a stronger bourgeoisie (like the German or American) without ending up making the proletariat pay for its crisis and its weakness?

We could not expect anything else from the “Socialist” government's Papandreou nor all the forces which for decades have practiced class collaboration in the name of a “national economy” and a “democracy” that are nothing other than the expression of the domination of the bourgeoisie over the proletariat and the whole society. A small minority of big capitalists have pocketed staggering profits from the exploitation of the proletariat, they have accumulated economic political, and social privileges, from the hide of workers in Greece, be they immigrants, illegals or proletarians born and raised in Greece, as a counter-measure they have distributed positions in public administration and instituted social buffers to systematically try to bribe a proletariat from which they feared rebellion.

The international economic crisis has placed the Greek bourgeoisie in difficulty, it did not hesitate for one second to attack the workers.
And they have expressed their anger against bourgeois attacks on numerous occasions with strikes and demonstrations.
But in Greece, like everywhere else, there is no classist trade union organization, or class party, which was destroyed by Stalinism. As in other countries there are by contrast multiple forces and organizations of class collaboration, even though they are diverse, they find their common purpose in defending the economy and “homeland” in the economic crisis (before defending them some day in war) and they now constitute the most effective weapon for the dominant class to control and deviate the proletarian reactions into dead ends.

The fake communist KKE who shout that “family needs must come before those of markets and profits” puts forward “national independence” against the big countries who speculate on the backs of Greece and a “real democracy”as the objective: there's no question of them demanding independence of the proletarian class as an objective, or calling for the international solidarity of proletarians and exposing the national interest and democracy as instruments of the class enemy!

Following the general strike of May 5 and the torching of a bank where three employees were killed (1), the Prime Minister, after saying he would not back off from implementing austerity measures, said “it's time to defend the country and democracy against irresponsible and uncontrolled political violence”.
The death of the three employees is cynically used to make the workers accept, in the name of nationalism and “democracy”, the sacrifices that Greek and international capitalism wants to impose!

Greek workers are the first in line to suffer the consequences of a crisis that has affected all countries and their struggle confronts and will continue to confront all the defenders of the capitalist order, nationally and internationally. The road they seek with great difficulty and confusion is one that the reformists and the collaborationist have so far managed to bar: The road of the classist reorganization initially on the terrain of the immediate defense of their living and working conditions, the path of proletarian struggle for the defense of only the interests of the exploited, the path of the class struggle!

Democratic, legalistic and pacifist propaganda administered in heavy doses and sustained by a policy of social buffers despite the country's economic weakness is particularly useful to the bourgeoisie in times of crisis, precisely because its function is to prevent the class struggle.


The proletarians have nothing to defend in bourgeois society, not the economy, nor the enterprise, nor the country!


They have no common interest with the bourgeoisie, they must prepare to fight against it and its mode of production (capitalism), its society and state!
This perspective is that of the proletarians of all countries, which must understand that in Greece they will wager the first skirmishes of a massive battle against capitalism that will become worldwide.
If the current struggles enable even a small proletarian vanguard to find the weapons and revolutionary traditions of the proletarian class and undermine the influence of the collaborationist parties and trade unions: that would be the means to prevent the struggle from once again being diverted from its goal!

For the resumption of class struggle, for the organization of the proletariat around exclusively classist goals, means and methods!


(1) Various hypotheses have been advanced concerning the burning of that bank. Any responsibility for this action ultimately rests with those who imprison struggles under the yoke of respect for the established order, leaving no alternative to the most combative elements for expressing their anger, in the absence of class struggle, that means sterile vandalism.
.

it will be interesting to see how bad it turns out