The government is acting as if we didn't have a rich country... 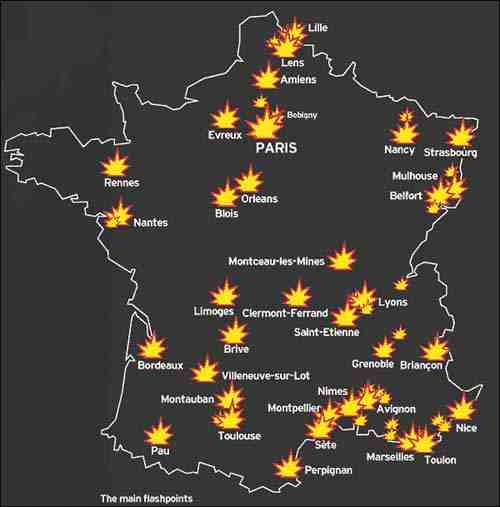 Why is it the French people get it and the British people don't. Despite the widespread disruption, the strikers continue to attract popular support with one opinion poll suggesting that 71% of those surveyed back the industrial action.

Many of the people here carrying the flags of the various unions will tell you this is not just about retirement age, it's not just about plans to change the pension system in this country.

It is also, they say, about protecting the French way of life.

They believe their government is not doing enough to address the needs of the poor in this country.

It is doing little as they see it to address what they call a growing gap between the rich and the poor in France.

While some of them do admit that it may not be possible to stop the government moving forwards with its plans to increase the retirement age, they do believe that they are part of a growing movement of discontented and angry people in France who will, in the end, win out.

"More than one million people have taken to the streets of France in a sixth national day of action against planned pension reforms, officials say.

Strikes have hit transport and education, 4,000 petrol stations have run dry and police have clashed with protesters in several cities.

Shops were looted in Lyon and cars were set on fire in a Paris suburb.

President Nicolas Sarkozy appealed for calm but insisted he would press ahead with plans to raise the retirement age.

He told a news conference in Deauville that it was his duty to focus on the "troublemakers" and ensure that public order was guaranteed.

"The biggest oversight would be to not do my job and to not ensure the financing of retirement pensions for today and tomorrow," he added.

Union officials called on transport workers to extend their walk-out into Wednesday."